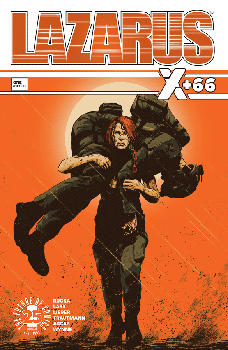 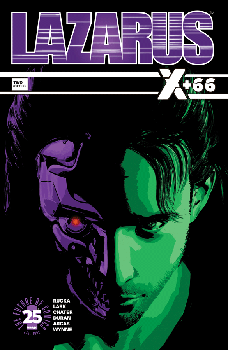 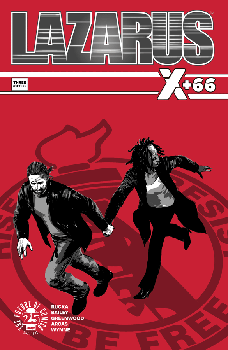 Yay for Casey! And I’m unsurprised that she completed her Dagger training and she brought others with her. Casey is a different candidate for many reasons. The first being that she does not buy into Forever’s godliness. (And frankly, I expected her superiors to catch wind of that and try to correct her.) The second being how she was recruited and obeying an order to train, instead of volunteering herself. And the third being that she brings others with her. Multiple times, she would’ve been justified leaving Cervantes behind, punching him, or letting him tap out. But instead, she stops him and brings him with her, which instills greater respect from him and everyone around them.

The metal banging to signal that they wanted out was such a great psychological technique. And totally right that they’d never let trainees bang on anything valuable.

I loved how Lieber drew Casey’s arms. They were perfect for her frame and also showed off her muscles. Overall, Lieber always excels when drawing military and combat situations.

It’s funny because this story is contained — and because it felt familiar (or at least the idea of bootcamp) — the Lazarus world felt a bit less harsh. I mean, yes, perhaps the training was more deadly than the combat training of the current US military, but this is the first time, I haven’t quite felt the time and technology gaps between our world and this one.

One thing I did feel was missing here was bioengineering. I expected the Daggers and the others to start taking drugs. We’ve seen that Marisol doesn’t age. And if these Daggers are the elite combat force just for Forever, then I’d expect a little of that. Or at least some hints among the instructors.

As much as I am excited for the next arc of Lazarus, I am happy to spend more time with other characters.

Oh, Joacquim, he just follows his heart. Which is what his uncle and aunt do not want him do. There’s some incredible questions here about man versus machine, and how much of one or the other Joacquim is.

His life is such an interesting contrast to Forever’s. In many ways, she’s treated much more like a machine than he is, even though Joacquim relies more heavily on machine parts for his powers. Which perhaps isn’t super surprising since Forever’s been/being literally replaced with newer and different versions of herself, instead of being the original and rebuilt by science and tech.

The family mythos about the Morray brothers. I’d love to learn more about how many generations one brother has killed another. Alejandro and Joacquim don’t necessarily have the same conflict. Though we still do not know why or how it was Joacquim who made the choice to become the family’s Lazarus.

Marta is such an interesting character. She seems both to have a lot of heart, but she also has to ignore a lot of what their family does. (Even if we haven’t learned a ton about the Morrays and how they take care of the people in their regions.) They also seem to have a lot less servants and other staff compared to the Carlyles. Seeing Marta making her own tamales seemed like an incredible act for the very privileged.

Even though Joacquim did kill his targets, it’s interesting to see how he’s continually portrayed as someone with a lot of compassion, romance, and emotions.

His aunt though. I was not prepared for her to the one to make the call to take away Joacquim’s free will. We don’t see it happen. But I don’t imagine that Marta or even Alejandro can stop it.

I don’t know what it is about Greenwood’s art, but it’s just not my favorite. This was probably one of my least favorite issues of Lazarus due to his art. I had issues with his style in Stumptown. I’m still uncovering why I don’t like it, but I find it uneasy to my eyes. (And no, this unease is not influenced by the general unease in this world.)

Oh, Joe and Bobbie Barrett. I feel like they and Dennis Solomon are like the two types of people I met the most when I lived in Oregon. Oh, they all have a definite feel to them. The way that Joe and Bobbie will always be rebels and the way that Dennis swallows propaganda for his country.

(I don’t recall Dennis in the “Lift” storyline, but that could be my memory. Rucka hints in that backmatter that we will soon learn more about Casey’s past, and I’m hoping we’ll get a little insight into her relationship with her grandfather.)

I do feel for the Barretts in that they kind of think Michael is doing something really evil. I mean, he is keeping evil alive, and I’m sure his work could/will be twisted, but I want to assure them that he’s still a good person.

Michael’s and Casey’s brush off of the Barretts was too real. I feel like Rucka just copied something he saw with his own teenagers. But these young adults gotta live their own lives.

I was excited for Joe and Bobbie to have friends who understood them. However, you know what happens to anything nice in this world…