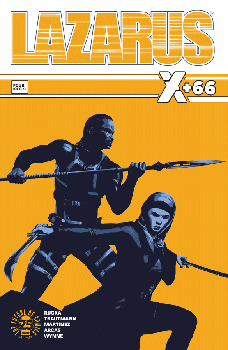 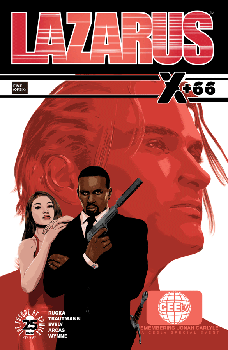 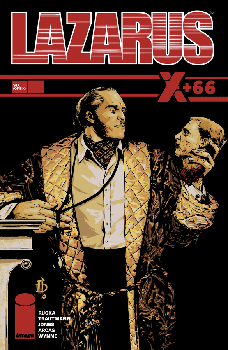 I kind of adore both Xolani and Alimah. It’s been kind of interesting to see how sympathetic Rucka writes a good portion of the Lazari. Sure there’s Zmey and there was the German one who was a huge dick. But otherwise, most of them, Rucka shines through their humanity. Even though they are built as killing machines and they also very much do kill lots of people.

Which meant that I loved the ending where Alimah and Xolani agree not to kill each other and tell their families they just didn’t have the opportunity.

With Alimah’s technology abilities — and wasn’t that swarm just frightening by the end — I kind of bet her hijab hides her technology. Especially as we see that her mother doesn’t wear a hijab (which granted should be a personal and individual choice), and from what we understand, the world is perhaps more secular than it once was. Though we haven’t seen much of Middle East yet, which would be the convergence of all three religions of the book and as popular in this world before Year X as is in our current world.

Considering how their humanity is portrayed that didn’t stop Martinez from displaying their ferocity in killing. This was pretty gruesome. Martinez may be the most graphic artists we’ve had on Lazarus (so far). Lark may show the blood, but Martinez showed the grizzle.

I do want to know more about the Soleri family, what happened, and why their territory is still rather up for grabs. There’s definitely something we want to know about going on there.

In either the backmatter of this issue or the last, someone asked about Hock’s sister Leah and if Malcolm had to do with her destruction. Now I’m kind of betting that Malcolm married Leah or something like that, and now Leah is the crazy wife in the attic.

I loved seeing Evely’s art in Lazarus. She’s a great choice for this world given how realistic she draws. Also, I appreciated her style when we see Seré dressed up for a ball and when she and the new Sir Thomas have sex. I appreciate them casting our new Bond as Idris Elba.

Also, I’m glad that we get an answer to why the Carlyles refuse to let Seré air the story about Sir Thomas’ death.

Sua Khab is a great character, and I do hope that we see more of her. I love how she is unfazed, and Seré knows it when Seré yells at her.

It seems like a very large coincidence that Seré would be kicked by a Hock defector who wears Jonah’s shoes. Though lots of things are orchestrated, and I guess, we can even see how luck may play into a lot of things. If anyone did set her up, it means James Sloan is a double agent, and Tyrese Davis has somehow convinced him to there’s a chance for a coup. (I also finally finished reading the Hock guide, and now I get this scene even more.) If anything, this does show how one of Hock’s greatest weaknesses is his lack of family members, even if we see family a liability (Jonah and Johanna, the Morrays and Joacquim, etc).

Seré’s headstrong determination and her use of everything she is — including her body — is an interesting look in what determines freedom. Seré believes (as she was told) that she has more freedom than Hock subjects because she isn’t drugged. But, as Tyrese points out, that doesn’t make her happy, and as he doesn’t say, that doesn’t make her free.

Seré believes herself to be fighting the good fight for journalistic freedom. That good fight includes going against Sua and going against the family. But everything she fights for, it’s not like she actually gets to air the stories and footage. In many ways, she’s given just enough rope for the moment.

Now uncovering that Jonah is still alive… We shall see where her fate remains, and just how free she actually is.

I did love the writing in the first half. I loved the framing of the story about hunting the Dragon. About myths — because myths are what keeps the Dragon in power, along with some super strength — and about fear and breakage.

Jones’ art style matched Lark’s in a way that felt closest compared to the other artists in this miniseries.

I cannot say I’m surprised to hear The Zmey’s backstory. That’s how you break someone. His family thought they had power. Thought they had a place with Vassalovka, and more importantly some power over them, which is why The Dragon was made out of the Morozov family.

All things said, Vassalovka has been a family somewhat in the shadows. We know of their killer. That’s it.

The Zmey’s speech also brings up what we know about the Lazari — that they are bred to kill. That they do terrible things. The Zmey just never sugarcoats it with charm.

Obviously, the family watches him through those dolls. However, I do wonder how they send him on those missions and why he goes. I do not understand his loyalty beyond some brainwashing. (And this got a tad graphic for me.)