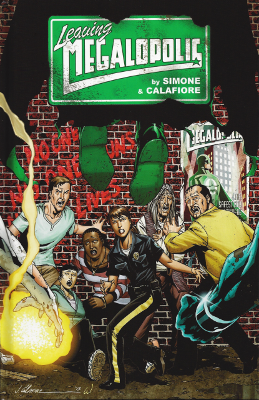 I backed this Kickstarter since I’m a fan of both Simone’s work and Calafiore’s work, especially their collaboration on Secret Six. I expected Leaving Megalopolis to be extremely violent and dark, and this book didn’t let me down.

The volume’s a nice hardcover quality and around 100 pages, which means it’s about 4-5 single issue lengths (if you were curious). I heard a few folks grumbling that it wasn’t longer for a graphic novel, but I’ve definitely bought other graphic novels of the same size.

Mina’s characterization carries the book from beginning to end. I loved how Simone worked in Mina’s earlier story with her current situation. I didn’t see the twist coming that Mina wasn’t really a cop, instead she was mall security and stole a dead officer’s uniform. I felt that the story of her with the raccoon and her pet dog made a great juxtaposition with the story of her mom getting beat by her boyfriend. That said, I still don’t understand why female characters must have great trauma in order to be inspired to be something larger in life. On the other hand, dudes do things just because. Like the male characters here who become heroes as they don’t like their awful neighbors.

Why it’s a huge trope in the superhero genre, I haven’t really read a ton of those comics, so this was interesting. I also think that Simone and Calafiore creating their own universe means you can take your superheros down and in a darker way than you could if you were writing Superman or Spider-Man.

Michael repeating the Overlord’s oath to him and him breaking through the alien influence that heroes don’t really change anything is powerful. In the myth of the superhero anyway and also in the way that comic book readers believe in some kind of hope and heroism.

I didn’t expect that Lisa would turn out to be a superhero, waiting to kill them. Seems like if keeping up with the set up of most of the other heroes, she wouldn’t be able to contain herself and wait to kill. But Mina coming into her own heroism seemed was the best. I’m hoping that this volume being labeled as “1” means more of this universe in our future and that perhaps Mina will live.

As creepy as Harold was, I think he served the story well in that it shows with any disaster, people can become bigger than they are. And also that who survives major disasters is kind of random.

Meredith and her clear PTSD is great. I loved how self-reliant she was, but also traumatized.

I know a lot of people really loved the story about Scout. I think it was more interesting from a point-of-view of how the human heroes dealt with and weren’t affected by the alien. The love triangle was less interesting, even if a call out to some heroes triangle arch-types.

I hope that Simone and Calafiore continue this universe, and I’ll certainly support anymore Kickstarters that they may do in the future. But I imagine that an independent publisher will pick Leaving Megapolis up, especially since Simone’s exclusive with DC is up.