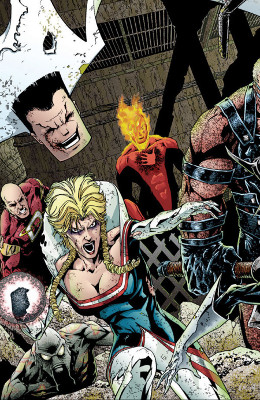 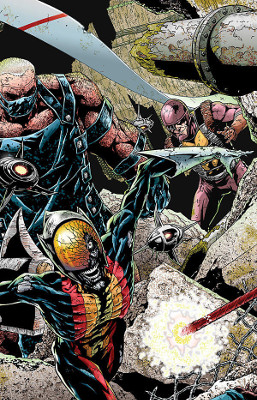 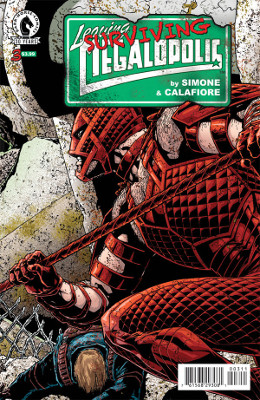 This opening is so good. I loved the original graphic novel they put out through their Kickstarter and good for Dark Horse for picking it up.

Southern Belle seems much more lucid here. In fact, all the turned-evil-heroes seem much better now than they were before. Especially if they are teaming up and obeying each other, instead of just in chaos. Overlord will likely heal himself.

Oh, Harold, of course he’s going to cave in and head back to Megalopolis, especially if there’s some money in it. Though I do wonder what the real mission is and Bennett Tanner’s actual play. I don’t necessarily buy that it’s just for a rich client.

I’m so happy that Mina survived. Of course, I do wonder how she did so. Besides being awesome. Love the twist that her childhood friend Cody is actually the current Crimson Shadow. I assume that he doesn’t have any actual powers since he doesn’t seen evil.

This book is so good. Simone should just keep writing her original characters.

Dang, Mina. She’s in a pickle. Going to need to change her look and some of her mission now. Unless Southern Belle actually forgets things.

I’m curious how Simone will deal with Crimson Shadow’s apparently not 100% consensual involvement with Southern Belle. Or is the disease just hypersexualizing Southern Belle and they are actually empty gestures. I guess we’ll know in the next issue.

Of course, the entire gang is back together. And of course, there’s a secret mission inside a secret mission. I suppose if they go down in that hole and figure out what happened, they could come up with a cure for the superheroes gone bad. Though whether or not those heroes with some newfound sanity would be able to survive mentally is maybe another question.

No answer to the question about Cody and Southern Belle. Though it’s clear she doesn’t know about his tricked out basement hideout. So Crimson Shadow’s a little less Daredevil and a little more Batman? And how do you keep fruit anyway? Mina isn’t going to be anyone’s sidekick.

I loved how Simone took Meredith’s freak out and turned it around. Without Meredith, those wolves would’ve killed them. Or the Ribbon would’ve slaughtered them, and from what we saw in earlier issues, he’s likely one of the stronger infected heroes.

Rainwater and Ethan are nutty. I’m not sure their motive is anything but the thrill of jumping into that hole. Of course, I’m sure there’s someone who’s paying to find out what’s down there and perhaps get some samples. If it is a disease, there’s likely a cure to be found. Not that I’d bet on anything so hopeful happening in one of Simone’s book, especially her creator-owned stuff.

I love the twist that Mr. Valiant, the rich guy the gang’s in Megapolis to rescue, is actually a super villain. I also love that the virus didn’t affect the baddies. Seems like classic Simone to need our villains to do some hero work or maybe they’ll have other ideas.