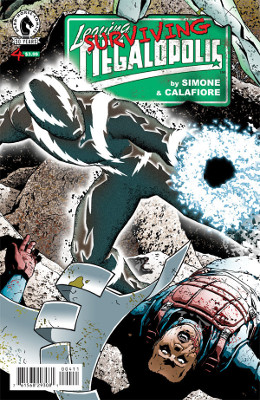 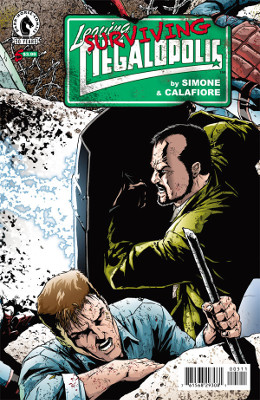 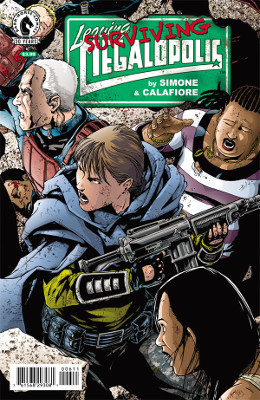 This issue felt a lot like all the things we knew were going to happen based on the plot Simone laid out just happened. It left me a little unsatisfied because it didn’t surprise me. No, not even the icky eyeball creature at the bottom of the hole.

Overlord is just a bit depressed. Of course, Southern Belle isn’t exactly there to cheer him up. Unsurprisingly, she does get a glimpse at how the Crimson Shadow didn’t actually kill “Oriole.” I do wonder just how far Simone will take this sidestory of Belle’s attraction and demand of sexual favors from the Crimson Shadow.

Not to mention, Mina is pregnant, which will become an issue sooner or later. That and her old friends thinking she’s a villain/superhero gone mad. And she kissed Crimson Shadow!

Ethan and Rainwater seem to be in a bit over their heads. I guess adventurers don’t discover gooey eyeballs or dead and smashed bodies every day.

Oh, those villains are going to be trouble. Of course, Valiant wants to take them all off the island. They will make great canon fodder. Especially since this Congressional hearing makes it very clear that they are not going to let people off the island.

I’m really unsure how this is going to wrap-up next issue. Unless everyone just dies or is nuked. And somehow that alien portal or dimensional portal or whatever is closes on its own. Since it seems like it also affects “normal” people, just for whatever reason it hit superheroes first.

I’m not surprised Simone killed off more people. But I will miss Meredith. She brought some balance to this book.

Between Southern Belle and evil not-Flash guy, Overlord, and Valiant, I’m also not sure how this is going to wrap up. Or not just be a bloodbath. In the first series, there was a very clear goal of getting out of Megalopolis. Here, there’s mixed missions, side missions, and other complications, not to mention the hole reveal.

Mina seems to be wavering. Or it seemed a little stretch that she’d have sex with Crimson Shadow. But we don’t know a lot about her to really say what’s normal behavior and what’s not. Also, how is this dimensional hole affecting her baby? Or perhaps her own actions?

Well, that was a less than satisfying ending as Simone and Calafiore are leaving it open for bigger questions. Without any promises of more.

First, Rainwater kills Sam at the rafts, and we don’t see the confrontation between her and Valiant. But she speaks to whatever’s coming through that hole and intent on enslaving everyone on earth. (Or at least driving them all mad.)

Second, the hole is still there. Multiple dialogs points out that for “some reason” there are more superhumans in Megalopolis than anywhere else in the world. Seems that we might’ve found that reason.

Third, we don’t know what will happen with Cody and Mina as they stay behind. Will Mina’s baby be a superhero?

Fourth, even if they make it easily back to the raft, there’s no saying that Rainwater won’t just outright kill Harold, Bennett, and the other survivor.

Fifth, if Meredith is coming back — likely evil — this could also mean that the virus or whatever either means no one can die or it means the superheroes were all killed before turned.

I loved Mina’s speech to Southern Belle. I loved what it revealed about her character and also about the changes to her as a person.

I want to sharing with you, please consider supporting me and my work by contributing to my Patreon.