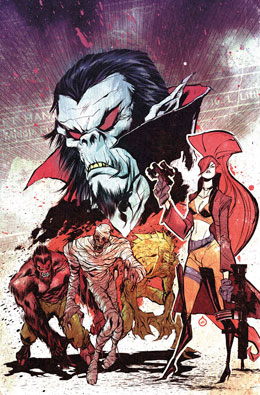 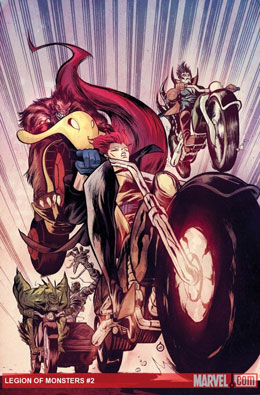 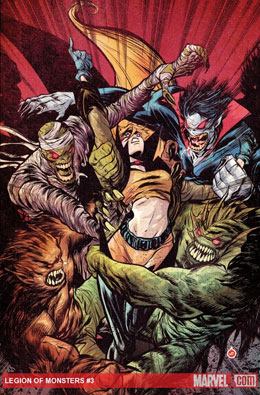 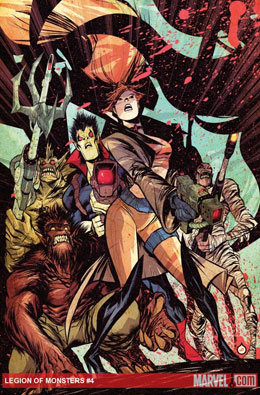 This is such a freaking fun comic book. I’m loving it so far.

This is really the perfect tone for a story about Elsa Bloodstone. I’m glad that Hopeless told a fun story, not a scary or serious one. Elsa may be a monster hunter, but in the modern Marvel universe, it’s hard to be scared of monsters. Especially when the main titles in this universe are pushing the horror of what people with power can do.

I love Morbius running this underground monster city and trying to make them civilized. I like the catch that they haven’t been doing this for too long. Manphibian, Jack, and the Mummy Guy (N’Kantu) as police detectives are pretty entertaining. I love how they’re taking phone calls for out-of-control monsters.

Of course, Elsa’s going to help them in the end. I’m really looking forward to more of this comic.

This continues to be a super fun comic book. I could dig this in a monthly version. However, I was kind of confused about Jack in his human form at the beginning. Makes sense, but I spent the first few pages being like ‘who’s this ripped guy that Elsa keeps hitting on / trying not to hit on?’

Of course, this entire curse thing is connected to Morbuis and some lady-love Susanna, who got fridged for his pain. Blah. Do not want. I’m hoping that she’s not really dead.

Anytime you have to get Daimon Hellstrom involved, you know it’s not a good time. Poor N’Kantu, just as I was digging his and Manphibian’s detective vibe and how they played nicely against each other. We knew you so not very well or long. Manphibian is right; mummy’s are brittle.

I love Elsa not wanting to accept Jack’s protection in hell. And then realizing how fucked they are as they go in. The whole conversation with Stannish was pretty funny, and I’m not surprised that it ended with Elsa’s and Jack’s protection from the other demons ending. So excellent that Elsa was the one who pulled out the grenade to throw into the hell portal opening.

This issue didn’t quite live up to the greatness of the other issues. Sad. It wasn’t as funny or fun as the other ones.

I’m sad that Morbius’ lady-love Susanna turned out to be the villain in the story. Though I don’t get her motives in bringing in Morbius to find a cure and pretending to be good.

I did, on the other hand, rather enjoy Dracula making fun of Morbius for being a laboratory-created vampire.

Manphibian was right-on for yelling at Morbius for not caring about N’Kantu’s death. They did have a wonderful buddy-cop vibe. Not to mention, them getting along seems central to the idea of this Monster City with law and order. The one that Elsa can’t bring herself to destroy. Even if she knows her father would’ve.

Elsa’s crush on Jack is cute. I don’t think he’s really her motivation for going into Dracula’s castle. She’s just being Elsa who would’ve gone in on her own anyway.

Oh, the poor irony of Morbius being the carrier of the disease and spreading it to his own colony.

I really loved the twist to this ending: Morbius wants to destroy the infected monsters and their colony, while Elsa advocates to find the cure. I loved that she was one who figured out the cure. Kind of.

Why didn’t anyone warn Jack not to turn into a werewolf? Seems like they should’ve warned him as soon as he woke up.

Of course, Dimensional Man turns into a huge problem himself. It’s like the story of The Old Lady Who Swallowed a Fly. Dimensional Man becomes a nightmare himself. However, with the power of all the other monsters against him, it made their odds a little better than Elsa and Moribus against all the infected monsters.

Yay for N’Kantu being revived.

Elsa leaving behind the monsters was perfect. She’s correct; she doesn’t belong there and she can’t stay around. However, I have a feeling she’ll be back for Jack at some point. Or if Moribus needs her.

Pre-order the collected version of Legions of Monsters.