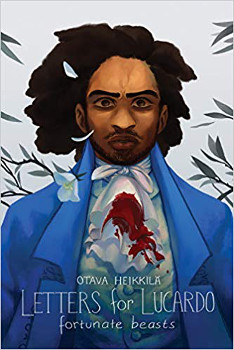 I continue to love this series so much. The pull and tug of Ed and Lucardo’s relationship is just the best. They are absolutely cute one second, and then the next, they are completely in over their heads.

Heikkilä created what is perhaps one of my favorite single panels in all of comics, where Lucardo, after a fight with his father, says, “In summary, father, you’re still an asshole, apology denied, leave me to eat my fucking cake.” All while he has a shit-eating grin on his face with the saddest, heartbroken eyes.

Of course, Lucardo rushes to find Ed as soon as possible. Of course, Lucardo flamboyantly decides they should get married and pronounces it before the court. No one can deny them, or pretend they aren’t there.

And even though Lucardo does this because of class and supernatural/human differences, it was so true to queer experiences. Marriage is a public pronouncement. It is a statement. Yes, marriage is a contract between people, but it also one with the community. You cannot pretend queer relationships don’t exist when you have to RSVP for the wedding and buy them a gift.

Lucardo is, in so many ways, the baby queer who is just out of the closet and letting everyone know. He’s donned himself in rainbows and going all out.

On the other hand, Ed is not a flamboyant person. He doesn’t seem as concerned about people knowing about his and Lucardo’s relationship and engagement. (However, he also is mostly in front of Lucardo’s friends and family, not his own.) Heikkilä was very smart to show this trait in Ed around the redecorating of Lucardo’s home to become their joint home and how uncomfortable Ed was around all the richness and the details of having the luxury to order fancy things for their home.

The ways Lucardo’s mother and his sisters come around the idea and acceptance of Ed was well-done. You can see how all the characters do love each other.

The ending, though, I’m not so fond of this cliffhanger and not having the next volume to devour. While I think Ed will pull through his sickness — especially given the flash-forward at the beginning — it is horrifying for all of us. And wow, that first doctor was so wrong about what to do when treating pneumonia, which is likely what’s wrong with Ed.