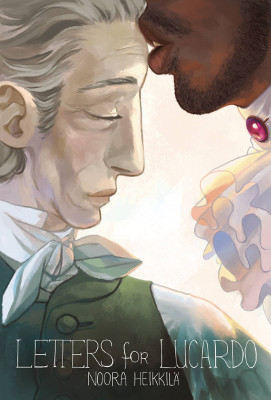 This book is an ooey gooey, sticky sweet romance, and it was exactly what I was looking for. I’m so thankful for Iron Circus for continuing to put romantic erotica comics for women, queer folks, and anyone else looking for this type of content.

The story is told from the point-of-view of Ed, a letters scribe, who’s a queer man and 61-years-old. It’s set right after the typewriter was invented (1868), and Heikkilä does well to show the trapping of the age. Indoor plumbing and soft sheets were things only very rich people could afford.

Ed works for the somewhat mysterious Night Court, which serves both as the governmental and religious bodies for immortals. His best client is Lucardo, a handsome immortal who’s over 400 years old, but turned when he was 33. Their flirting is obvious, but coy. It fits the manners of the time, and it builds a nice anticipation for the reader.

However, they definitely get to making out and then having sex pretty quickly. Don’t worry.

Heikkilä’s art does a masterful job at showing age on bodies. Ed may look good for his age, but he does look age appropriate. Not only is it lovely to have a book about romance with an actual older person, but one that’s thoughtfully portrayed, both in the art and the words. Also, great to have a very old vampire who is not dating a teenager for once.

I loved the scene where Ed and Lucardo have two rounds of sex; Lucardo warns Ed against going too much (since it’s “been a while”), and then the next morning, Ed’s curled up in a ball and complaining that his entire body hurts.

Lord Von Gishapt, Lucardo’s father, is a jerk. Though it’s not surprising to see him as the gatekeeper to access to his son. It’s all political. It’s all about keeping up the immortal’s appearances and superiority. But some of it is about Ed’s age, and Von Gishapt not wanting to see his son hurt when Ed invariably grows older and dies. (Immortals are turned when they are younger and more pleasing to beauty standards.)

There’s still a lot of questions here left unanswered about the structure of the Night Court; though Lucardo does let it slip that he and his father designed and implemented it.

Lucardo’s sisters are sadists. They seem excessively cruel to Ed. Especially since they know he won’t do anything to them because of his demeanor and his position in society.

Though their “jokes” do get us a glimpse to confirm that yep, immortal = vampire and Lucardo’s teeth are sharp for a reason. I loved the touch of the ceremonial knife being what’s actually used to cut into humans for blood, not just their teeth.

Appreciated Von Gishapt’s partner Elimedes being nonbinary, and this just a fact. (And also another way that Lucardo’s sisters tried to embarrass Ed by having him do the wrong etiquette in greeting them with their societal title.)

I loved the sweet picnic in the yard with the strawberries, where Ed and Lucardo get high. The deer was a nice added magical moment without taking you too far from the story.

It’s been awhile since I’ve read a vampire romance. This was enough of a twist, and different enough that it worked well for me. I cannot wait to read volume two and figure out what will happens between Ed and Lucardo. More sweet queer love stories please.