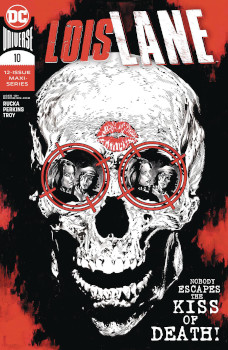 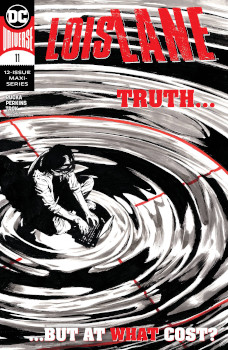 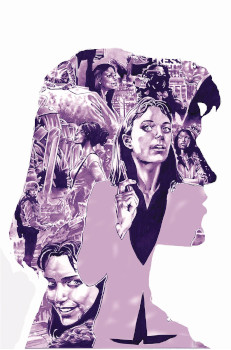 Those multiverse art spreads from Perkins — yowzas. Which I know is a term usually signifying a good thing, but not here. The floating heads are straight out 80s and 90s art styles. They clutter the page. I get that we’re trying to show different versions of the same person, but could we do it more creatively? Could the flow of these pages be less literal?

Well, at least we captured Kiss of Death? I’m not sure there was much of anything else particularly moving in this book. Lois is still reporting, eating junk food, and having the conversations of a married couple with her husband. That’s what she does. At least this time, Superman brought his cape and bold primary colors inside.

I cannot help but wonder if the pages of the multiverse explanation was editorial. If a reader has never heard the concept of multiple universes (doubtful in 2020) and if they have no idea DC comics has a canon multiverse that’s been destroyed and rebuilt 1,000 times, how will they ever understand this book? (But you know, just ignore Leviathan.) Back in my day, we just looked this stuff up on Wikipedia ourselves.

Where’s the big secret? What happened to that plot? Now the big movement is Jessica finding she can do spells and Renee taking a bullet.

This is where it becomes very clear that DC screwed over Rucka by changing this series from an ongoing title and making it a 12-issue “maxi-series.” (I know it’s proper grammar, but using “maxi-series,” just makes me think of maxi-pads, and well, do any people who menstruate work at DC marketing?)

What I don’t like about this penultimate issue is the redemption and revival of Kiss of Death (Elicia Sanchez) as fully human through her love of Renee, in which they were together in another universe. This could be interesting if the concept was getting more issues. This could be an impactful story about redemption and what leads us on the paths that we wind up on. This could be a great team-up of women (Sister Claire, Renee, Lois, Jessica, and Elicia). However, DC editorial chops this and makes it an all too convenient wrap-up for the series.

Once again, I find myself loathing Perkins’ art. His facial expressions are always off for the moment, especially in a story that, while it has action — which Perkins is also not good at choreographing — so much is about the emotions. These characters are finding out about themselves and who they are across worlds. Not to mention, this issue hinges on Elicia not just finding herself, but realizing she loves Renee and will forsake her role in the Religion of Crime for love.

Perkins’ art around their love is such a salacious male gaze into lesbianism. Renee’s literally wearing a corset.

What I did like was Lois having some second thoughts about her plan, and the others knowing she had this plan. But I’m still not sure what the story’s focused on, except to tell people other alternative universes exist?

Yikes. I’m not sure there is anything new I have to say that I didn’t say in my review for #11. My feelings are the same. This book would’ve been interesting as an ongoing, but as a limited series, the ending splats.

With ongoing status and a better artist, especially one who can draw women, this would’ve been a highly entertaining must-read. Instead, this is the first Lois Lane title in decades, and it was disappointing.