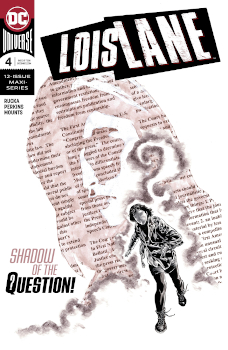 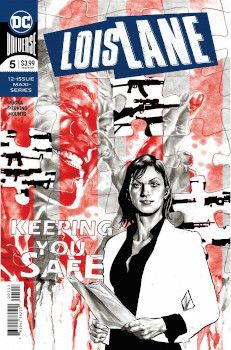 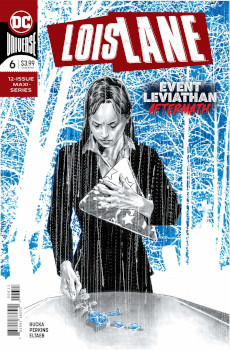 I’m unsure why we needed this scene with Superboy. I mean, at least he got dressed very soon. The part where Lois says a stork didn’t bring him seemed to be a direct answer from Rucka to the fanboys that love to speculate about Superman’s super sperm and how he’d destroy a human woman’s womb. (Men on the internet are a lovely bunch.)

I’m glad to see that Renee and Charlie are not pitted against each other. We’re not sure why Charlie is there; however, he doesn’t seem like the enemy. While I didn’t think Rucka would go in that direction, you can never be sure.

The part where that woman killed herself was a little gritty with me. I know Rucka loves to play with the Religion of Crime and Checkmate, and this seemed to be a mix of both. I have to admit that the Religion of Crime was my least favorite part of Rucka’s Batwoman book and other Question stories. (Though I wouldn’t mind a Batwoman cameo here.) I do appreciate the art pointing to the clue.

Lois’ mothering is sweet. I love it when she tells Superboy, “You’re my hero.” It shows how special he is in her life, and how much she will miss him as he goes into the future with the Legion. Plus, it’s nice to see a mother let her child be an adult.

I too want to know how Lois and Renee became friends and colleagues, and I cannot wait for the next issue to learn what secret Lois has been keeping and how it’s going to play out in the remaining eight issues.

This issue flagged a little bit for more. As much as I love the Question, the story felt unbalanced for the time spent with each.

But the four stars are mostly for the art. The entire Question fight scenes, I was just looking at her boobs. While it’s nice to see that Perkins understands boobs enough to know you don’t have to have huge boobs for them to be on display, it seemed unlike Renee. She’s supposed to be mildly butch, and she doesn’t use feminine wiles to get her way, so it seemed like only a poor art choice and a misunderstanding of the character.

Plus, Renee’s moves here exposed her chest in a way that said, “stab me in the heart.” Maybe Perkins needs to meet some lesbians.

The opening scene with Lois and her talkative seatmate on the plane was a bit much. Sure, guys offer their opinions and hot takes on everything. However, it all felt heavy-handed even for a book about a journalist.

I wanted in on the secret from the last book. Obviously, it’s something about children as Lois talks to her source. Wow, that move with the statue was bold. Same with Jimmy skipping work, so he didn’t have to tie Perry’s bowtie.

I hate crossovers. I refuse to buy (literally buying comics) into the hype, and even if the regular series I’m reading is pulled into the fray — or centered on whatever Lois and the Question previously discovered — I’ve decided to skip it. I did try to look this up on Wikipedia, and apparently, the comic book nerds aren’t updating Wikipedia with the same fervor they used to. I just got that it was something with religion, the League of Assassins, and Talia al Ghul.

From Lois Lane, we learn that in this mess, Lois’ father Sam dies. This issue is Sam’s funerals with flashbacks to Lois finding him dead and then various pivotal points in her and her father’s relationship, plus some snark from Lucy, her sister.

Lois and Sam have some classic teenage daughter coming into her own and then his disagreements with her journalistic career — particularly around sources and the military. Rucka does a great job of balancing the emotional sides of the argument without making a judgment that either is better. It reads like whatever one is true is better.

Of course, one of their bigger arguments is over Lois’ relationship with Superman as a source, then as a potential love interest, and then a full escalation when Sam finds out that Clark is Superman. This is after Clark and Lois are married, which I appreciated as a frame.

At the funeral, Lois cannot accept the American flag from the military officers on behalf of Sam. Clark does. Though later, when Lucy calls her sister out on this, I cannot help but wonder why Lucy didn’t, and why she let Clark do so. I was also thrown out of the book in this scene by the art where Lois’ lip is supposed to be trembling. Obviously, this is paper and ink, not TV, but how Perkins draws her face, it makes Lois look like she is a teen with braces forced to smile for a family photo.

I hope the next issue will prove to be back on track for a Lois story.