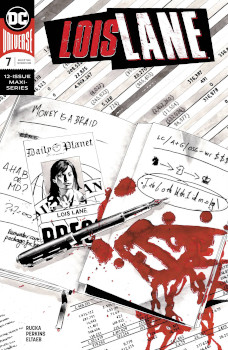 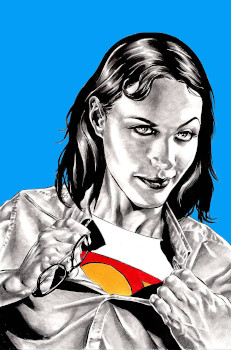 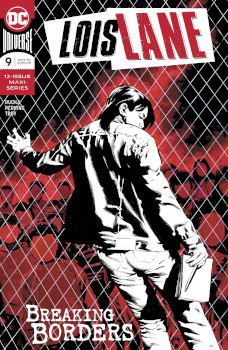 The crossover bits are still interfering with my ability to understand what’s supposed to be happening, especially concerning Jessica. I’m also not a fan of how Perkins draws her like a skinnier version of Lois with smaller boobs.

I do not buy that Renee hasn’t put two-and-two together that Clark is Superman. That seems like less of a leap than Lois publicly cheating with Superman when she appears otherwise happily married. Renee is smarter than this, but I assume this is one of those DC editorial things where no one can put two-and-two together. No matter how much logic that defies.

It was also beyond evident that the housekeeper lady was not who she said she was. Like I don’t believe Renee and Lois would be that distracted not to notice how mysterious the new housekeeper acted. Again, this issue isn’t adding up. Even if there was a bunch of hubbub going on, neither of these women is that much off her game. Too much of this issue was convenience for the plot’s sake.

Is skull-faced lady VP Bones? Or Senior Strategist Bones? It seems like this book wants me to know who she is, but alas, I do not.

The fight scene left me cold. The flow wasn’t to the standard that I’m used to in Rucka’s books. My friend Max called Perkins’ art “Lark-light.” And yeah, here it shows. The positioning of bodies and moves across the page seemed scattershot, and I found myself quickly flipping through the fight, instead of trying to see what else it told us about the story.

Likewise, the scenes with cops left me even colder. Right now, as I’m reviewing this, the country is (once again) raging at the deaths of black people at the hands of cops (once again), and in this book, we know Lois and Renee are going to figure out what’s going on long before the cops.

Either Renee has quickly accepted that Lois is having an affair with Superman, or she did figure out Superman = Clark. Even if in the last issue, she was in the “glasses fooled me” camp.

When they went to the neighborhood where Lois’ housekeeper lived, I liked the acknowledgment from Lois around her white privilege and how she stood out.

This book feels like it’s getting out of the event and back into its own mythos. Of course, Jessica, she is a character from Checkmate, which Rucka had a pretty good run on 20 years ago, and while I’m always happy Rucka never thinks his readers need their hands held, sometimes this reader needs her hand held a little bit. (And I’ve read at least the first arc of Checkmate in the last ten years.)

Perkins seems to understand better how lesbians dress. I suppose better late than never. We got some vest action.

I don’t understand how Superman cannot understand the occult. From what little I’ve read about the Kryptonites, they had their own occult and magic movements. But I did enjoy the back-and-forth snark between Renee Montoya and Batman. Batman, who, of course, knows that Clark is Superman, which I’d like to see a nod to Renee also being in on the secret.

So the Kiss of Death is Lady Director Bones.

Lois getting access to the ICE detention camp and visiting Alejandra showed a lot about the heart of why Lois does what she does and how she isn’t going to back down. Lois will go against the government when she believes they’re wrong. And she will go against an assassin. I do hope we see a resolution with Alejandra by the end of it.

I appreciated the nod to Superman being allowed to live in the United States due to the threat of what he could do (or what he knows). However, the scene did miss Superman’s whiteness and his appearance as a white man. If he’s not using his powers, he looks like every other cis white man on the street. Given that Renee is a queer Latina, it seemed like she should’ve pushed back a little more on Lois. It’s not just because they are heroes, or have the blackmail that got Lois into the ICE camp.

Jessica’s body language made her read as possibly evil. It seemed like some weird art styling choices. I guess we’ll see what happens when they cast this spell.