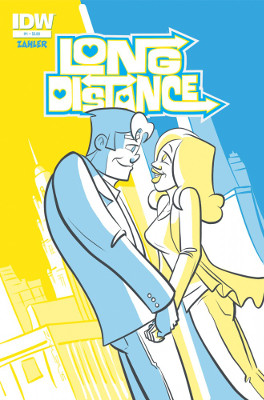 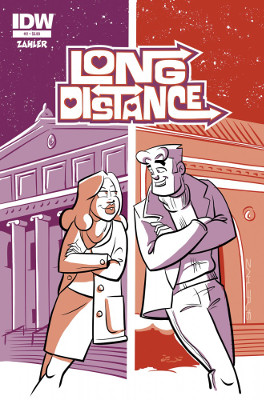 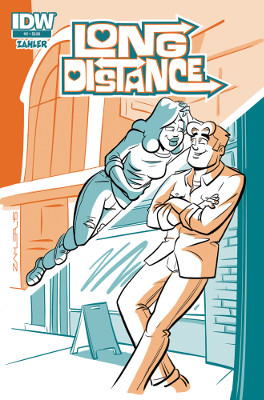 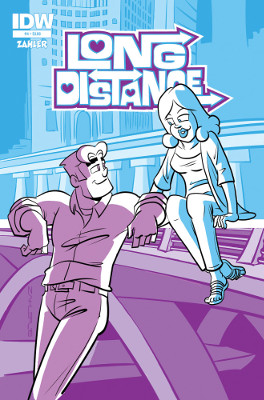 I love that Zahler writes romantic comedies in comic book form and is so unapologetic about it. I love that this first issue of Long Distance is a mega issue, longer and heavier than any other comic on my stack. I love that both of his characters — Carter Blue and Lee Smith — are completely obsessed and overwhelmed by their romance, and that it’s all their friends can talk about too.

This book feels very now with its influx of tweets, texts, calls, emails, and just the reality of reality. Not to mention the pop culture references. Seriously, within the first six pages, there’s a callout to how much Deep Space Nine and Babylon 5 were underappreciated.

Let’s talk about other things I love: that she’s a scientist and he’s an ad graphic designer. That they both have assumptions about what the other does based on pop culture. That Lee calls out that Carter doesn’t act all shocked that a woman is a scientist! And happens to be pretty too.

Zahler’s art is great. The use of monochromatic colors to signal the cities that they’re in is perfect. This book is so cute, and I imagine it will continue to be so. Of course, it does start off with the premise that Carter and Lee aren’t together anymore, so we’ll see how that goes.

Carter and Lee continue to be adorkable. I don’t think this book could get any schmoopier if it tried.

I do find this issue kind of hard to review: really cute yes, but perhaps not groundbreaking romance. It’s fun and entertaining, however, I’ll see how the next issue goes to consider if I want to keep review it.

I am happy to see Zahler introducing a gay character, Stephanie, before the very end of his series, like in Love and Capes.

This continues to be super adorable. I’d probably take it off the review list if it wasn’t a limited four issue series, and well, we’re already almost done with the story. I assume there’s going to be a part where our famed couple reunites as I’d be surprised if a Zahler story had an unhappy ending. (Or if there wasn’t plans for Volume 2 where Carter and Lee reunite.)

The yellow monochrome choice for Las Vegas a little hard to read. I preferred the parts in Vegas where it was night and there was much darker shades of everything. A teal or a deeper color would’ve gone off much better.

I do love seeing the tradeoff of Carter supporting Lee’s career after she support him with his last minute client needs. It was also nice to see Lee sciencing it up and commanding a stage. Really any media that shows women and minorities as leaders in their field and as peers to each other gets my vote.

I continue to really adore Stephanie and Lee’s friendship, especially their sharing of romantic moments together. It is, however, a tad ominous that Stephanie keeps mentioning a double date that hasn’t happened yet.

Of course, I have a feeling that Lee’s career path may be what ends of breaking up Carter and Lee. There’s long distance with a short flight, and then there’s extra long distance.

Zahler is such a sap in his comic books. I don’t know why I ever made the assumption that Carter and Lee weren’t together anymore. Even if Zahler tried to misdirect us into believing they were broken up. They just could’ve been finally together.

I did appreciate that the long distance became too much for them. They were also very lucky to have very supportive friends and family. Obviously, they couldn’t leave Grandma for the remainder of her life. But both Stephanie and Tim also widely encourage them. They likely wouldn’t have lasted as a couple without them. It also helps that Carter has location flexible employment, even if as Zahler expands the story, he does give him concrete jobs.

That and Carter seeing Frankendrac 2 with Tim, instead of with Lee, might’ve been a deal breaker.

This series was super cute, but I’m not so sure if it had any actual stakes for Carter and Lee’s relationship.

Enjoy the cuteness of Long Distance.