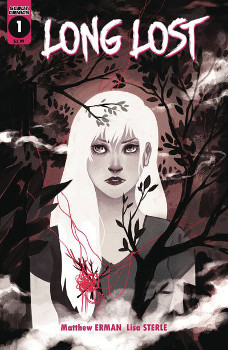 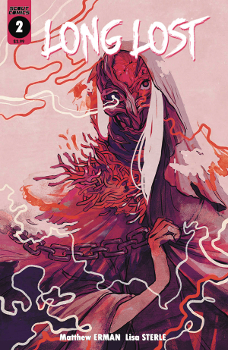 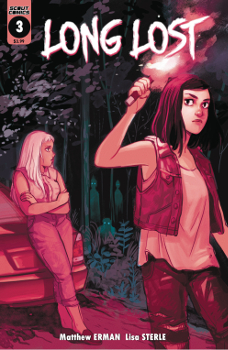 My guess is that the beast is either the mother or the manifestation of Piper’s grief. I do wonder how much of this her sister will be able to see. Or either of them can see. It doesn’t seem like Piper notices that the beast is around.

But Pockets?! I hope Pockets is okay. Never kill the dog.

Sterle’s black and white art is great. I love how she draws Piper alone. It’s so fitting, and it’s a certain type of alone — of being a lone woman and wanting to stay alone — that I don’t see captured very often.

The book is a little grosser than I expected. However, it played as a contrast.

Piper’s sister Frances is pretty great. Her conversation with the woman next to her on the greyhound about all her thoughts on children. All those non-opinions. This cracked me up a lot.

Looking forward to the next issues.

I’m not as charmed by the second issue as I was first. It felt less together than the first. More nebulous with less direction.

I do love the idea that Frances knew something was wrong when she couldn’t reach her sister. I adore this kind of connection between siblings in media. The almost telepathic, I knew that you needed me.

I don’t blame Piper for being so mad about Pockets being stolen. Getting an invitation to their mother June’s birthday party in the Hazel Patch in exchange for Pocket doesn’t seem like a good trade off. Especially if they are supposed to be careful in those woods.

The creature’s design is interesting. I’m looking forward to seeing more. However, I felt the changes between the memories of them as children and them in the current left their current versions looking much younger than they are supposed to be. (I assume they are in their mid-20s.)

The sisters should’ve been a tad bit smarter about how they’d get stuck near the woods. That was widely obvious.

I suppose that we will be learning more about their mother in future issues. Often times, mental illness in fantasy/supernatural stories end up being the people who can actually see what is going on. Seems like this book leads in that direction.

Though what’s up with the heart in the well?

We did not seem to go anywhere. Instead, the Hazel Patch led them to being attacked (?) by spirits (?) and then warded off by a lady in white. A lady who said she knew their mother.

We also did not find Pockets.

I’m not sure what the action was except that their aunt seems to know something they don’t.