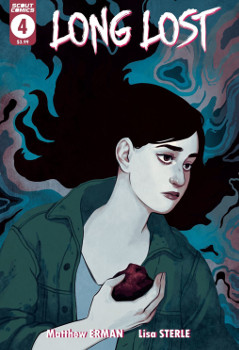 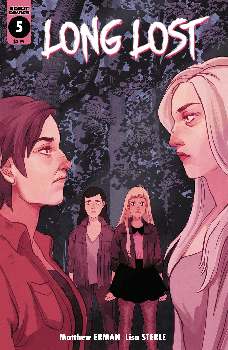 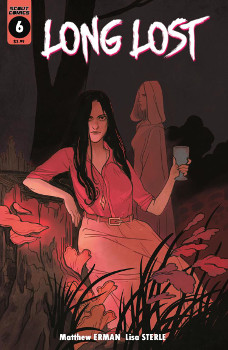 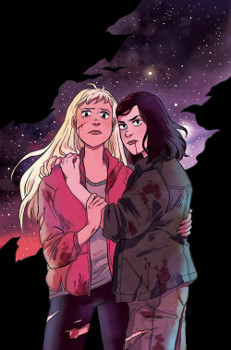 So this series is picking up steam again? A lot happened in this issue, especially when contrasted with the last one.

I certainly can understand Piper as the one who runs away from their hometown and just never was very girly like Frances is. Seems like she was very prepared to primp, even if they were broken down the night before. I guess I didn’t realize Hazel Patch was the name of their hometown. Not sure if I missed that earlier, or it wasn’t clear as it’s not a name that screams ‘town.’

Piper is very guilt-driven. Particularly, the guilt of leaving their hometown and leaving Frances behind. She’s very much out-of-her-element without being in her own town and in her own house. Frances appears adaptable to any situation, and perhaps that was how she coped with the town and whatever happened to their mother.

Jody desperately needs to sit them down and tell them what’s going on with town. Or what she knows anywhere. This cough fit, and then zombification seems contagious.

And the secret sister Joanna… she can wrangle the zombie people. So many more questions.

With every issue, this book becomes more lost. Or at least, I stopped being able to follow the plot threads. Does no one care about rescuing Pockets?

Joanna set those infected people on fire and poisoned them? What? What the heck is going on in this book? I don’t understand her and Jody’s sisterly relationship either.

Clearly, Frances and Piper are supposed to be going over the River Styx. However, they are just so trusting. They get on that boat without questioning anything. They just go for it.

I guess that’s my problem in this entire book. Like this is a bunch of white people nonsense in how no one asks any questions and now there’s probably some mass murder related to a cult.

Will there be an ending to this book that makes sense? Will the story come together in one final issue? It remains to be seen.

The pacing is probably the weakest part of this series. We spent so much time early on going slowly, but now with everything having to wrap up, it’s all action, all the time.

The monster is still unknown. I assume the monster guy with the ax is what the town’s people are turning into.

We still don’t understand what’s going on with the mom. From the flashback and John’s words about how she hadn’t lost her hair, I’m going to say that mom had cancer. Or that would make the most sense. Maybe she just had the monster disease, or that’s a metaphor for cancer. So many small towns in the middle of America have been destroyed by cancer-causing environmental disasters.

Am I thinking about this book too much?

I do like Piper and Frances’ relationship with each other, and how at the end of the day, Frances was a jerk, but she does love her sister. Maybe this is all about them confronting their fears about the other and their sense of being abandoned by their parents.

Not sure why their old house was only accessible by boat… Of course, there is much about this world that I do not understand.

Uh, what just happened. Don’t get me wrong, I’m very glad that Pockets is alive.

I believe what happened is that everything was just a dream. That from the minute Piper and Frances got into the car accident that they were lost and hallucinating. Especially as we see the entirely broken down and deserted town of Hazel Patch.

Pockets must’ve just run away. And Piper must’ve just come to see her sister try to repair their relationship.

But I still don’t get it.