Since this review was posted, Jason Latour was outed as an abuser. As comic books are a collective effort, this review will remain live, but I cannot in good faith recommend purchasing this book or other works by this person. 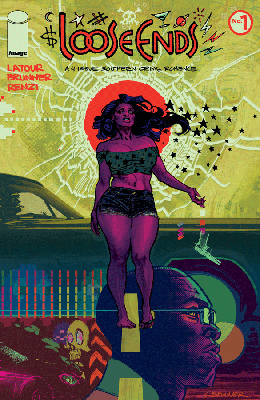 Okay, I got this issue because of the cover art. Or well, it ended up my to-read pile because the cover art features a black woman as a Madonna (in the Medieval art sense) and the rest of the layout look interesting. But I should know never to judge a book by its cover. Especially a comic book. The issue I have features the original cover in the backmatter, and well, I would never bothered. So maybe I’d be back to where I started by judging it via its cover.

So let’s talk about the tone of this book. Violent. Masculine. Desperate. People compare Latour as a writer to Jason Aaron, and the back cover features a quote from Aaron about the book.

The main character Sonny is a vet and a (maybe) former drug dealer. He’s trying to find himself or make amends for his past. Which includes paying off a woman Kim, who seems like she’s his baby momma for a baby he hasn’t ever seen. Kim works in a seedy bar in the middle of nowhere.

In the meantime, Cheri (the black Madonna from the cover), who also works at said bar, gets sexually harassed by two other male patrons. The five of them are the only people in the bar. As Sonny and Kim have a moment on the bar’s front porch, the two white hillbillies grab Cheri and proceed to try to gang rape her in the back bathroom.

At this point I asked myself, why do I ever try to read books by white men? Why you always gotta make your grittiness about the sexual assault of women? Am I supposed to say “well, at least no one’s pants were off?”

Then Sonny tries to redeem himself by getting into a fight to protect Cheri. There’s a gun. Because there’s always a gun. ‘Murica. Kim gets shot in random fire and dies. ‘Murica.

The only reason I’m giving this issue two stars is because Brunner’s art is actually well done. His layouts are interesting. He varies his art styles, but makes them a cohesive whole. His scenes move forward the action. I’d read more of his art.

But I won’t be reading the other three issues of Loose Ends.