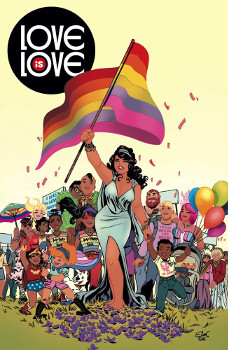 This book took me forever to finish it. I wanted stories by queer creators celebrating queerness. In the wake of tragedy and for about two months after the Pulse shooting, all I wanted was to immerse myself in stories of queerness. To wrap myself around the tales of our culture, and this was one of the book sitting in my to-read pile.

My first reading slowdown was because so many of these stories focus on the horror of the Pulse shooting, and it was too much. The juxtaposition of repeated trauma from real life and media’s tendency to bury your gays — the trope where queer characters are killed off — was too much. I can’t help but feel survivors of any tragedy would want to celebrate life over force us to endure more death. I expected one or two comics to feature the dead, or meditations on them, but it’s an entire third of the book.

The second slowdown was when it was clear so many stories were by cishet straight people, missing nuances of queer life and meditating on their allyship or how to talk to their kids. Going over the list of creators on the cover, I knew a lot of them were not queer. I get timing and how quickly this was put to press after the Pulse shooting. I also get how marginalized creators — perhaps with the exception of actor Matt Bomer — may not attract the same media buzz due to how systemic oppression works.

Still, non-queer creators taking the center stage made Love is Love seem like allies applauding themselves. Or at least that this book was not for queer people. That it was for non-queer people who were sad about Pulse. Or more importantly, had to talk to their kids about it.

Gen Z is the most queer generation. While I am not that age and thus cannot speak to lived experiences of what it’s like to be in K-12 now, it seems that Gen Z has been sheltered and saved from homophobia by changing societal views in a way, as an old Millennial, I was not. I also can’t help but find trouble in narratives that are “I care about marginalized group X because my son/daughter/sister/friend/etc is part of this group.” Just like a cisman shouldn’t have to have a daughter to care about sexism or the gender wage gap, these non-queer creators shouldn’t have to have queer children to care about homophobia. That said, I do find it interesting how in queer kids may get “the talk” from their out-group parents.

(I’m not sure if “the talk” is appropriating this term from black culture, where parents warn children about racism, such as how to survive an encounter when a white police officer pulls you over. But queer kids, since their parents are often non-queer, must come to understand homophobic behavior and deal with it on their own, instead of in an in-group support system. I certainly never talked to my straight parents about my middle school/high school bully who used homophobic slurs against me.)

Anyway, my third slowdown was sloppy editing of stories that erased bisexuality, pansexuality, and asexuality. There were a few stories that showed characters dating a variety of people of different genders, but all were very much “I’m gay now” and erased how bisexuality and pansexuality do exist. There was also an odd comic with a closed door with sounds coming from it, which focused on the fact that sex between two consenting adults with the door closed is none of your business. It awkwardly brought up how it might be asexuals moaning as a joke. Which was weird, and perhaps troubling that it’s the only time I remember asexuality coming up in an anthology with a zillion stories.

And then I almost threw the book at a wall. One of the few trans characters in the book was deadnamed in a story by non-queer creator James Robinson. The story centers on a non-queer man whose non-queer son is marrying a trans woman. The man gives a toast at the couples’ wedding, and he speaks to his struggles with acceptance of his daughter-in-law and how he came to love her. He makes a semi-joke about her deadname, gets the name slightly wrong, and then she corrects him. I was horrified. It felt completely unrealistic that this woman would not only stand for that — at her wedding, in front of many stranger-ish people — but then correct him. As a cis person with many trans friend, there are a handful whose deadnames I know, but I would never betray that confidence I was given this information. Especially since this guy did not know her pre-transition and said it into a microphone at her wedding. A microphone. At. Her. Wedding.

I wanted to like Love is Love. The art was actually above average. Which was saying something, given how comic book drawn in a short time span typically do not have great art. And it’s great that the proceeds went to charity to benefit Pulse survivors. But these were not the queer stories I was looking for.