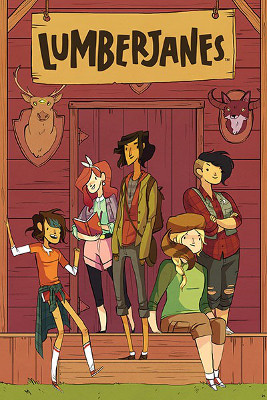 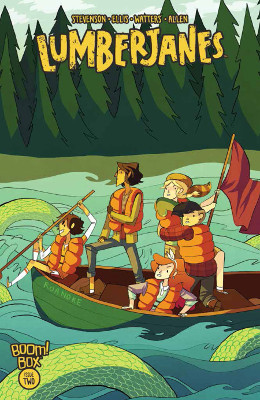 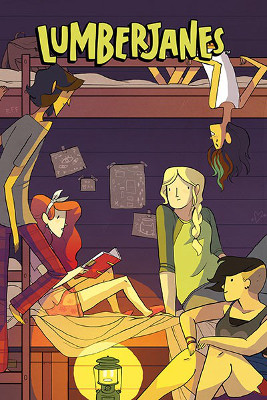 Lumberjanes is just as adorable as I’d hoped for and full of female characters who have names, represent different types of girls and women, and talk to each other. Friendship to the max!

I’m looking forward to the coming issues to get to know the girls better as they develop. There’s a lot of characters in this book, and I’m still sorting out which girls are which.

Jen, the stern and also exasperated young adult camp counselor, was also a standout for me. Right from the moment where she mentioned that space camp was her other choice. I’m hoping she doesn’t get drug too far along in the story of not knowing what’s actually going on. Well, in that I hope she wouldn’t become a victim of her ignorance. It would be kind of funny to have them always running into magical/weird stuff when Jen’s back is turned.

I like April a lot as their leader. Them beating up the fox creatures was pretty funny. As was Rosie reminding them that “punching animals” is against the rules.

I’m curious as this story grows if the magical elements will be “magic” or “magical realism.”

This book continues to be super awesome. Though I’m still sorting out the characters. Not because they don’t have distinct personalities, but because I’m clearly bad with names.

Though I can’t help but wonder…where’s Jen? They just left her in the river, granted the safe part, after they paddled to shore. Ripley clearly ditched her for adventures against the sea monster. And while I get that they are children/teens, you’d think that someone would at least point out Jen being missing from their party.

Mal and Molly’s clear beginnings of romance is really cute. I mean, they are more than just best friends, right? I also love that no one cared that it was actually Ripley who gave CPR to Mal.

I was waiting for someone to point out that a sea monster of that size was clearly unsustainable in a river.

The three-eyed eagle, following the theme of three-eyed foxes, stealing Ripley’s chocolate bar was a nice touch. And I like how they all assume that jumping down into a cave is going to be the safest course of action.

This is just freaking fun.

Lumberjanes remains the best. My only complaint about this comic is that it’s only supposed to be an 8-issue run. (Good news! Lumberjanes is now an on-going comic!) I suppose there’s only so much fun you can have in one summer of camp.

I’m with Ripley and wish that everything was the work of the Holy Kitten!

I liked how to get out of the cave each girl showcased a different skills she had. The skill varied a lot from the arm wrestling with April to Jo figuring out the Fibonacci sequence of scary hopscotch jumping. Also there were skills across the board from physical feats to word puzzles.

Excellent. I’m having so much fun with comic. I love how worried and upset Jen was when they returned.