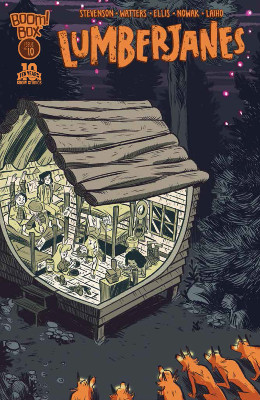 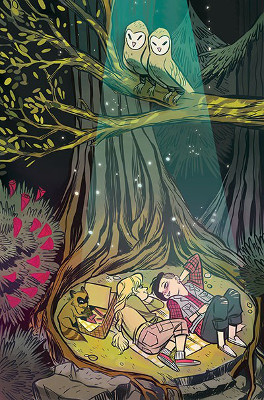 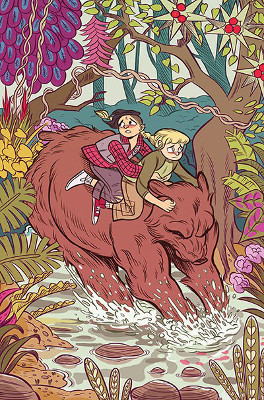 I thought Nowak’s art fit well with the book. I was actually more thrown off because of how similar it was to Ellis, but just different enough. I like how the characters are rounder under Nowak’s pencils.

Of course, free day leads to the Lumberjanes getting into trouble. That sounds like exactly what would happen to them. Oh, the irony of April complaining that things were just too boring when she didn’t have supernatural people to fight.

I love that they were actually worried about all the badges that they hadn’t earned. And then they all figured out how terribly boring and outdated those badges were. Ripley and Bubbles were definitely my favorites in that scene. Cake sounded like a good compromise.

Poor Molly and Mal, now they got more than they bargained for in their picnic. I guess that’s what you get for following the Bear Woman. But it’s good to know there was a reason why velociraptors came out of the outhouse. I like when stories have threads. Even if I don’t quite believe that the dinosaurs could’ve really easily navigated the timestream by themselves. Also, I maintain that outhouses are scary places.

I wonder if there’s a time traveling badge?

OMG, Bubbles with a little black tie bowtie is the most adorable raccoon ever. Ripley in that ridiculous dress and Bubbles were just the sweetest.

Plus, it’s just fun to see April extremely frustrated with life and be not good at things. She is very overly ambitious, while Jo is kind of under-ambitious, and then Ripley is just along for the ride.

I love Mal and Molly admitting to each other that they get scared. Molly was right that it was unlike Mal to be scared of the Lost Land. I enjoyed that they just didn’t go back in time. It was a nice twist on things. (Also means that the writers can have more fun and don’t have to rely on actual history…)

Now we know what Rosie’s and the Bear Woman’s problems with each other are.

The incredible cuteness parade continues on.

Loved April talking about how they’re going to destroy in timed scrapbooking. Jo is correct in that they probably would’ve earned more badges had they just kept cool and had fun. After all, that was how Ripley earned hers in the last issue. (Bubbles was sorely underutilized in this issue.)

Molly’s insecurities continue to be perfectly showcased in the jurassic era world. I love her finally admitting everything to Mal about how scared she was once their time at camp was over. Though it is a little bit different for the Bear Woman to have stayed in the forest after Rosie became camp director compared to one of the girls.

The dinosaur was definitely cute with spectacles.

Don’t miss out on Lumberjanes Vol. 2