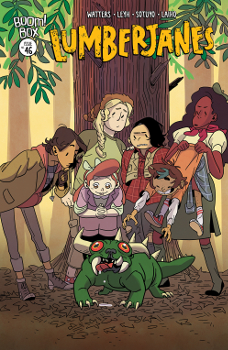 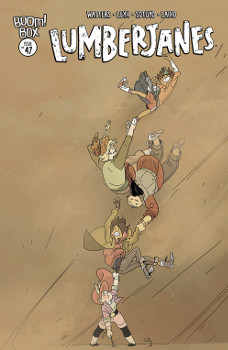 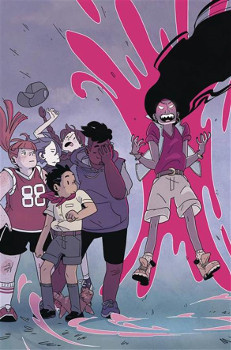 I still don’t understand why the Lumberjanes weren’t more keen on helping Emmy find her father. They seem to have lost that thread. Also, it’s pretty clear that Emmy is from the past, and it seems like one of the Lumberjanes should’ve noticed that.

Instead, Emmy is going on a hunt for a jackalope and something happened to her.

I did really enjoy the jackalope fake out with the rabbit in front of some tree branches giving an optical illusion. My bedroom wall features a jackalope — taxidermy by my great-great grandfather well before I was even born — and I love it so much. Especially when adult people ask me if it’s real since “yes” isn’t 100% a wrong answer. Mwahahaha.

The creatures are very adorable, and this is some of Sotuyo’s best art to date. She starting to make these characters more expressive and get to know them a lot better.

I’ve realized that these four issue arcs haven’t been doing much for me since Boom moved to a four issue tradepaperback. (Which is such a freaking rip-off when the singles are cheaper and they’re moving the bulk of their books to tradepaperback only.) These stories need more time to marinate and develop. I hope the Lumberjanes is given the space it needs — and what made it so popular — to have longer arcs.

This issue always felt like it was suffering from condensed storylines. A lot of action happens here: Emmy goes on a hunt, she gets sucked up by the tornado, the animals go to find the Lumberjanes to help, they help, they find Emmy, they rescue her father too, Emmy discovers the tornado just needs friends too, and they find the unicorn rabbit.

The lack of space in the action means characterization suffers. Sure, at 47 issues, we know the Lumberjanes pretty well. But the most transformative parts of this series as a whole is the characterization. Whether Jo and Barney connecting over being trans and enby to Ripley’s connections to her Mexican heritage, these moments are highlighted in friendship. They aren’t solo moments, but instead group efforts, kind words, or team discoveries.

I really did enjoy Emmy as a character. However, she’s far too complex when it comes to her animals and her father to keep her around at camp as we’ve seen with others like Barney or Diana. Emmy’s no-nonsense approach to the nonsense of the supernatural was delightful. And also very much ranch life.

One thing I wondered was what time period were Emmy and her father from? Their covered wagon travel seemed to indicate the past. However, it could’ve also been part of an act. Usually, we’ve gotten the nod when creatures — like dinosaurs — have appeared that they were from time holes. But the tornado turned out not to be time-related.

It was fun to see the Zodiacs get a little more attention. Since they came in as the rival cabin to our main crew, they’ve been humanized a lot. And of course, they have yet another magical member in their cabin.

Camp newspapers seem very true. Especially for kids — who outside of camp have social media — newspapers would also seem pretty novel and like something every single one of them would read, given that they don’t have internet access.

Love how Barney and Marigold break down everyone into telling the truth and confessing their hearts. Such a good reporter skill, and also just shows how much the Lumberjanes have embraced Barney without explicitly pointing it out.

It makes perfect sense that Diana would be too lazy to do her own horoscopes, and that she’d get blamed for them being too truthful. It was amusing that activity rates went down when everyone was worried about personal safety. Oh, Cassandra, she found the one way to break her curse, or in this case, she found out that Diana did break the curse. Seems like this is only a setup for future shenanigans.