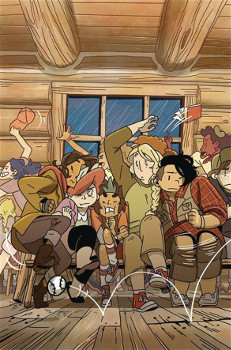 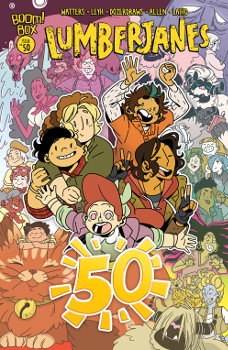 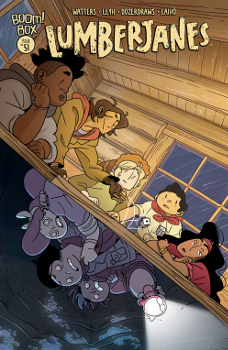 Gotta love a rainy day adventure! Of course, they find a secret tunnel underneath the rec room / cafeteria, and that it happens while they are trying to steal snacks. This is some classic Lumberjanes, just in time for issue #50.

It was really nice to see the girls interact with different campers. And this was a nice chance for Dozerdraws to show off their drawing style. Each camper has a look, and oh, how do I love that all the campers just look like kiddos having fun.

Ripley and Jo doing yoga together was my favorite rainy day activity for sure. It was too cute. Especially seeing Ripley immediately get distracted and in on the snack-stealing shenanigans.

Mal does need to learn how to make new friends, and April needs to learn to curb some of her perfectionism.

I about died laughing at the game table with the Zodiacs, Jo, and Molly. Emily’s game is too true; so many trendy board games have way too many rules. Have witnessed many friends spending four hours learning to play a game that only take one-to-two hours to play. Games with resource management, shaking my head. I’m Diana in this situation.

Only camps are justified to have that big of jars of mayo.

Before I begin my proper review, I’m a little sad they didn’t go all out for the 50th issue. While I am loving the current storyline — and it’s one of my favorites of the recent ones — usually these special issues have more to them. I don’t need a glitter cover, but a bunch of stories from past Lumberjanes creators, or even some people, who Boom might otherwise never get to write Lumberjanes, but would do a short special, would’ve been nice.

Once again, Boom shows how they are always about cutting costs. They have a bad reputation of being one of the lowest paying comic publishers (though there are a lot of more publishers than there once was) and people having a hard time getting paid by them. They also take forever to publish trades (which these Lumberjanes trades should sell like hotcakes to Raina Telgemeier’s audience), and they put only four issues in the trades and charge a six+ issue price.

This 35-year-old with disposable income should not be your target audience, and I’m certainly not when it comes to the stories. Do better, Boom.

Board, Board, Board by Shannon Watters and Kat Leyh (written)
Art: Dozerdraws (illustrated), Maarta Laiho (colors), and Aubrey Aiese (letters)

OMG, I adored the two plotlines here so much. They allowed it to not be too scary, and also be highly relatable for kids who are adventurers and those who’d rather stay in. Both of those are fine life choices.

Of course, April’s bragging that she’s all muscle, and then she’s scared of bugs. This is classic April hubris. It’s what makes her lovable and human.

All three of the girls shine here and show off a bit of who they are. Ripley’s draw in by the glow-in-the-dark bug goo. It has to be bug goo; there’s no other option. And just when you need someone with a clear head, Mal is there. She figures out which tunnel is likely to be the one they need to go down. Also, it’s the one without the giant bug.

Adored Dozerdraws’ view into the soil. Their inclusion of a dinosaur skeleton and a rabbit den, with all those stolen vegetables, was just tonally perfect for this book. The stories are typically pretty on point, and it’s really the art details that levels this book up.

Emily’s game is too funny. Watters and Leyh, again, show how much consideration they put into the personalities of each Lumberjane and what they would do during a game. Of course, Diana would be bored and then she would get really aggressive and want to win. Molly is more concerned with her knitting and is building what she wants without an angle to win. (I wondered when someone was going to call Bubbles a trash panda.) Hester and Jo are the dramatic ones, and Barney — they surprised us all in coming as the wild card.

Oh, Barney, I love them so very much, and I’m so happy we get to see more of their personality. This is an added layer to them. We’ve only seen Barney working in cooperation and being supportive of everyone, but here they are, breaking out on their own. And it’s wonderful.

Boom did, at least, commission the original artist Allen for a short here. I always love getting to see Nellie, Rosie, and Abigail back in the day. Of course, I wanted more Rosie and Abigail in love.

The narrative leads us to believe this is going to be a story about them. But it turns out to be a story about Nellie instead. Rosie and Abigail discover what they think is her big secret — that she can turn into a bear — but later, we readers learn that she has a bigger secret. There’s a photo of her as a younger woman, and she’s on a man’s shoulders. I’m going to assume this is her big brother and that he died in the woods adjacent to the camp.

Somehow, when Jen told them they weren’t allowed to go outside in the rain, I do not think she meant not to if they were stuck in a tree, after being lost in a tunnel, and having a giant prehistoric bug on their tail. Here is a moment when we remember they are all kids.

Ripley’s obsession with bugs fits her so perfectly. When I was around her age, I read books about giant predator animals attacking humans and memorized Star Trek TNG trivia obsessively. Bug facts are just going to further freak out April.

I loved the reveal that Mal understands, so maturely, that it’s okay if she and Molly have different interests and go do different things. It doesn’t mean they still aren’t a couple, or that they don’t like each other. This is such a fundamental lesson that pre-teens and teens need to see. Teen romance can really suck the life out of everything, and girls, especially, get lots of emotional burdens around it, including having to be there all the time for the person they’re dating. There are just times when you should hang out with your friends and run away from giant bugs with them.

Then Diana takes it too far. Of course, she’s going to magic them into the world they are building. Which will likely have some real consequences her split second decisions didn’t take into account for.