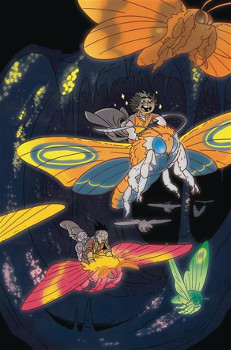 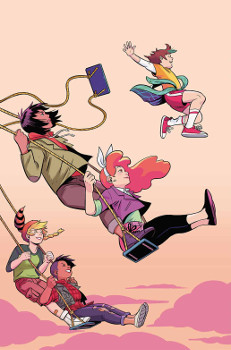 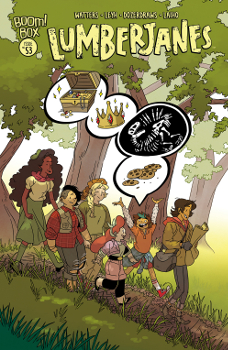 That was pretty satisfying ending to this story. The adventure was all wrapped up, but still with some consequences that we can deal with in upcoming issues. I do hope that Costco can deliver all the way out in the woods as they are going to need more food.

Dozerdraws is fast becoming one of my favorite Lumberjanes artists. They know how to capture the spirit of the book. Those Mothras were fantastic, and Laiho’s colors worked so well too. I’m not a huge bug fan, but loved the beautiful reveal of the bug ecosystem. April and the readers get some bug demystifying.

And okay, maybe you find another route back through the tunnels when your tree’s literally destroyed by lightening.

Again, Dozerdraws shines as they upgrade the board game players wardrobes. The little details of Molly’s suspenders and shorts are too cute!

It was too funny when Emily realized no one was going to win, but then had a delight when it turned out the entire crew was having too much fun. That’s what games are supposed to be about.

Of course, the game did end in a flood of bug babies with Ripley getting permission to go outside. Ooops.

The art was good, and the costumes were cute. It was nice and colorful. Gonzalez is great with facial expressions. I loved April’s expression of stubborn angry reflected right back at her on the fairy’s face.

But the story itself, felt obvious, overeager, and maybe a little too wise.

The obvious part being the name of the story, and how it was presented. Mal deciding she and Molly were going to be Romeo and Juliet, and then having a masquerade already put a lot of Shakespeare in. Of course, fairies were also having their celebration, and of course, they were the ones stealing the decorations and costumes. While everyone was having the same issues around fighting over themes and costumes.

For overeagerness, it’s obvious Adelfinger was excited to write this story. However, the constant use of some of the Lumberjanes‘ tropes, like yelling a story-related feminist’s name or Jen just being flustered, felt overused. When they yell a feminist name, what makes it special is that it doesn’t happen all the time.

And for the little too wise — while I liked the Mal and Molly plotline — it was wrapped up in a bow of a bit of maturity in apologies. The kiss was cute. But usually when you’re a teenager, you lean into the hormones to get you out of trouble. Like maybe Mal would’ve used the kiss a little more as a distraction to pull Molly away from being upset and more easily forgive her.

I like Williams’ art more than I liked the story. The story was okay. It was slightly better than the first one. But it was hard to get intense about missing Ripley, since this is not going to be the type of book to kill off a character.

Of course, Ripley would find an underwater cave and name it Ripley’s Land. That’s on-brand for her.

Loved seeing Jo use her science to figure out there was a cave and that Ripley wasn’t dead.

I did want to see a little bit more of them in their swimsuits as one thing Williams has a talent for is dressing characters to match their personalities. Her art talents felt a little wasted with double duty.

This issue felt like I’ve been there before. Treasure maps and everyone rushing into action, while assuming everything will turn out a-okay. And that statues shouldn’t be put back together with glitter glue.

Each of the characters, of course, have their own dreams about what’s going to be on the Xs when they find them. Gotta love April wanting treasure. And Jen following them into the forest in her swimsuit as they didn’t meet her for swimming.

The Tromatikós is a little scary, especially with the ability to transport with Ripley as her captive. She picked like the most annoying Lumberjane to bring with her, which she’ll no doubt come to regret.

Diane has almost zero legs to stand on. She always does impulsive stuff. Diane just has a little more Greek mythology knowledge than everyone else.