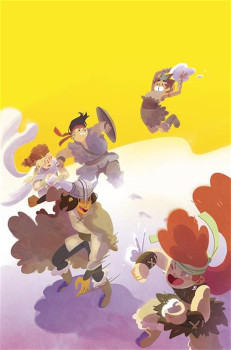 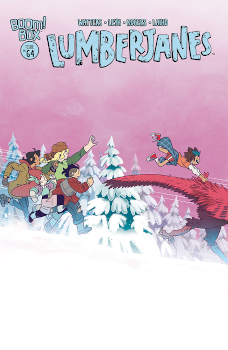 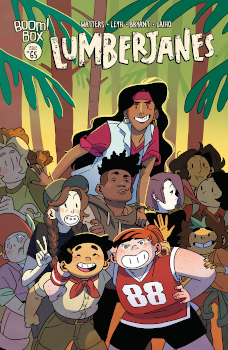 I guess it makes sense that the Roanokes stay. They were always going to do so, even if Mal wanted to go home, and now they have to since they lost Nellie’s spy glass to find the portals back to camp.

At first, I assumed the snow would be about climate change, and how the dinosaurs eventually died out. Nope. It’s something else. A crashed space station blocks the dinosaurs path out of the valley, and presumably to someplace a bit more warm.

That’s a lot of dinosaurs! I’m surprised Ripley isn’t freaking out even more in excitement.

While the sled ride hooked up to a velociraptor (which Ripley rode) featured the classic examples of how the different characters look at their different experiences, this didn’t bring anything new to the table. Perhaps this space station will.

I have to admit that the change in whitespace distracted me. I’m not sure why the book changed this layout, or if Boom’s making some tradepaperback size changes. Rogers has been penciling this book long enough that the layout change mid-story was jarring.

Along with the whitespace, the writing felt light here. We had some resolution and admittals from Mal to Molly about her feelings around being brave and feeling guilty about their current situation. But the rest was everyone being the most.

Jo must explore the space station, and we learn that her fathers are conventional rocket scientists. I love how she casually admits to being aboard space stations before, but leaves out the part where they were on Earth still.

It was refreshing that not all the dinosaurs were friendly vegetarians.

Ripley just Ripley’d, and the dinosaurs were saved. It seems like she needs to learn a lesson about having to wait and think through her problems instead of acting on impulse as the story keeps rewarding her for doing so. Which I get is more fun in the narrative, but it rewards her.

Will the Sasquatches save them from Nellie’s wrath?

New story, new artist, and we’re not going to figure out how mad Nellie got at them.

Instead, it’s all the Lumberjanes together, going to watch a meteor shower. This gives us time again to interact with the Zodiacs and develop more about Hes and Emily. While the Zodiacs started out as clear foils to the Roanokes, they come into their own more and more. Even if Diane and April are going back and forth in outshining everyone.

Emily’s obsession with aliens was a fabulous contrast to Jo’s serious space interest. I do love the ending with Freya and how, I believe, it plays with the Norse gods as both gods and aliens, like Marvel comics does. Though where are Freya’s cats!?

Hes has a crush on Diane, right? The meta parts about Mal and Molly being the camp couple were cute, and nice to see a different perspective on their relationship from the very close view we normally get.

Bryant’s art has the quality expressiveness that any good Lumberjanes artist needs to have. Their art does make the campers look a little more mature, or more like they have those tween bodies where some kids hit puberty before others.