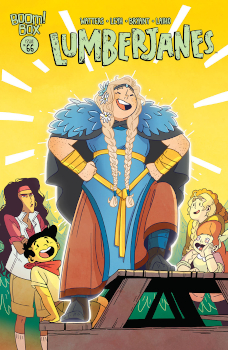 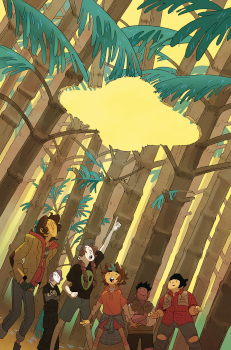 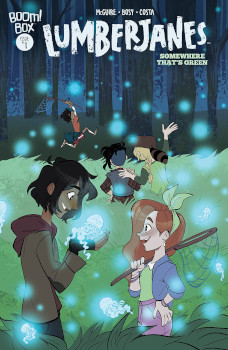 I don’t know how this happened, but somehow I got spoiled for the cat kidnapping. Maybe just all cat news gets passed by me in the algorithms of social media?

But also, it was odd that Freya didn’t show up with her own cats. Maybe Marigold is one of them, and that’s why she has those size-changing powers. Freya, in mythology, did ride on cats.

I loved Diane getting jealous about there being a new god in town. We’ve seen her mildly jealous before, but there’s always been a time limit, and she’s always been the only god to be an official Lumberjane. Whereas, it seems like they were ready to take in Freya before she ran off with Marigold. Not to mention, April’s fawning over Freya in a way she never did Diane, and her dislike of Diane has always bothered Diane.

I called it that Hes had a crush on Diane. It was cute that the others coached Hes not to say all those compliments to Diane because she was already insufferable enough.

Poor Barney. They’re such a good cat parent too!

This issue was pretty cute, and it nicely balances the two different storylines while further exploring our favorite characters.

Diane’s dogs Wubby and Doughnut were pretty adorable. I love how the other kids stare at them and Diane’s reaction to them. Plus, the later jokes about their names. Indeed, you can’t expect much when you let a small child name pets. Bryant’s art was fun when Diane pushes Barney in front of the dogs so they can pick up their scent to find Marigold.

It was nice to see the writers play more on Diane’s goddess powers and her stories, especially in putting them to use. Previously, we’ve seen her stories play with her family, or other gods and mythical creatures she’s interacted with in those stories. This is the first time we’ve really seen the powers outside this framework. (Minus the one short about when the Zodiacs start a newspaper, but even then Cassandra the Oracle’s involved.)

Barney freaking out that Marigold may actually be Freya’s cat was touching. As someone who’s adopted several adult cats, considering where they lived before they were with you is something you think about. But somehow, I believe Marigold will stay with Barney; mainly, Bryant’s art of them hugging each other and crying was telling.

Emily’s story about why she was so upset about not finding aliens was sweet. I love that the others were like “omg, I want to go to your parents’ restaurant!” because I had the same reaction.

The bright light that our alien hunters found was either a result of the Freya and Diane battle, or they found Freya’s cats. The creature did look rather cat-shaped. Or maybe that’s what I always hope to find — more cats.

A detour from a story about cats to another story about cats. Brilliant. This reflects my biggest interest as I’m 100% Ripley in this story. (Let’s just agree that we’re all a little Ripley.)

From what I know about Lumberjanes‘ writers, McGuire is — I believe — 10-15 years older than most of the other writers. I do think this reflects in her writing. Not that anyone cannot write YA work, but the language felt more adult. I do want to say that I enjoy McGuire’s writing in general and am a fan.

Bosy’s art was delightful. I particularly loved their take on all the cats and them being green as the girls cleaned them off. Bosy was great at balancing that tween/early teens look, where everyone appears young but starting to go through puberty.

Since this story is about gardening and about epimeliads, Bosy made a smart choice to tone down and bring in more natural colors to pages. Noticeably, April’s hair isn’t quite the bright red like in other books, but still clearly red.

All the creatures were incredibly fanciful. And no one was surprised that the Lumberjanes made themselves new friends. I adored this combination between the fantastical and the garden. Hats off to McGuire and Bosy for this balance and being creative in a world already populated with many mythical and magical creatures.

This was cute. It was nice to see Jo frustrated and work through her problems. Also, for something to not come immediately to her. The Yetis are the slackers of this world, and this is a great through-line.

The best part of the story is the final page where the Lumberjanes watch the aurora borealis. The art is gorgeous, and the last lines of dialog snappy.