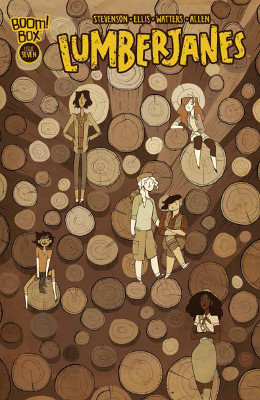 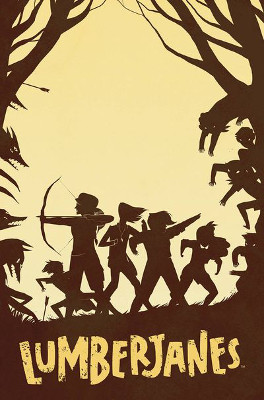 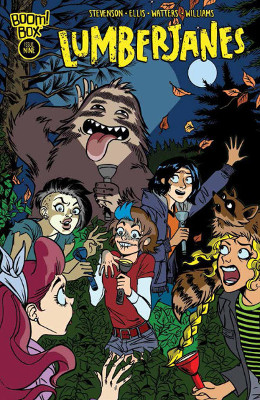 Not Jo! This is my emotional reaction. I assume that friendship will save her from her stoney happenings. April will definitely get pissed, and we already know she can arm wrestle a god.

Yep, completely called Diane as Artemis. Not surprising given all the mythology and her name. Also April is completely justified to be suspicious of her motivations. It’s very true that there’s no guarantee that Artemis will be a better ruler than Apollo. Especially if the twins are supposed to be complementary to each other’s strengths and weaknesses.

I adored Jen taking off the Lumberjanes’ uniform as she doesn’t want to sully it with “mutinous shenanigans.” Perfect. And that Rosie has a hard time recognizing her.

Love that Mal gets her moment to shine with a good idea. She has plans, and she finally got to use them.

This book is so awesome.

Friendship to the max! I love Lumberjanes, and I absolutely loved how they saved Jo, especially since April and the others had been questioning Jo’s alliances.

Jen getting her nerd on about the solar eclipse and the star charts was fabulous. Especially since Jen felt like they didn’t really need her. They did now.

Apollo being the leader of the boys troop was too good. Especially since he would’ve been playing as an adult. I appreciated how the girls lied to Artemis (and Apollo) to get them out of the way to obtaining the power.

Ripley getting the power was the best thing ever. I don’t know which was the best wish: Bubbles getting a cute hat or everyone getting a kitten. Kittens for everyone! Also, smart of her to wish that Artemis and Apollo couldn’t hurt them again and for the power to go away. Zeus showing up as the incompetent weekend dad was also pretty funny.

Looking forward to this being an ongoing series.

Lumberjanes remains the best book ever. I love all of them trying to tell scary stories. Of course, Jen can’t tell one, and I love how even though she’s a counselor, she’s trying to earn badges herself.

Each scary story tells quite a bit about the characters and what they fear, depending on who’s telling the story and who’s scared by it. Unsurprisingly both April and Jen are scared of the ghost girl story from Jo as they both fear being socially invisible. Ripley’s is about evil candy and being separated from her friends, and Mal’s is about practical living.

Of course, Molly’s and April’s were actually somewhat scary, and that Jen comes up with a story about science and her at the science fair. (Or a character like her because Jen’s not that old.)

Loved the Bear Woman coming up to steal their marshmallows.