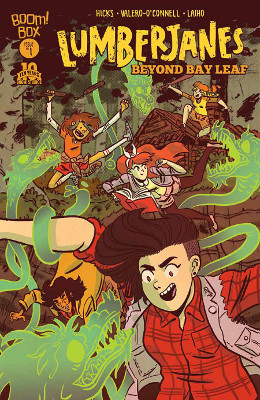 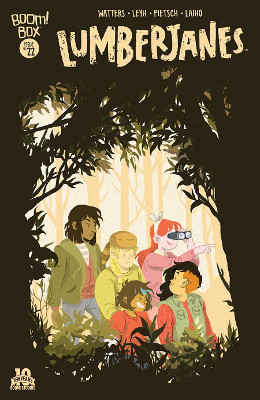 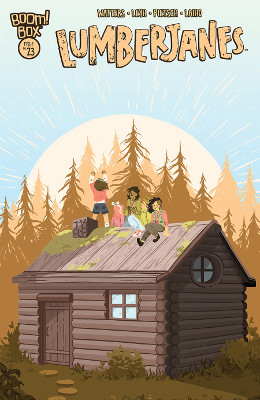 This story is super cute, which I’d definitely expect from Hicks. Also a tale focused on Ripley and how awesome she is. Any story that brings back Mr. Sparkles is going to be good. Or has Ghost Ponies!

Oh, Jen, once again, she gets left behind when she’s trying to teach the Lumberjanes something useful like star watching.

Sola’s comment about fast food and their observation that there’s a burger joint just down the road was pretty great. The magical forest may be vast, but it’s more like a T.A.R.D.I.S. than the State of Alaska or something. I did like how the Lumberjanes were disgusted by Sola’s hunting.

Unsurprising to see yet another hunter character be evil. Nothing beats friendship, so Sola shouldn’t have put her immortality up for bargain. While a reality of being an adult, it was really sad to see the reality the Lumberjanes will probably face, which is likely that they won’t be friends anymore when they’re adults.

Adulting is terrible. Ghosty is awesome. End of story.

I definitely appreciate how good Boom! is at keeping different artist’s styles in key with the book. Pietsch’s pencils are a great fun match for the Lumberjanes. Particularly these stories where they are out in nature. Those I appreciated all the details in Bear Woman’s cabin.

Seafarin’ Karen is super ridiculous. But I do love how she really just wants people to hang out with and friends. Which Rosie was right that the Lumberjanes were the perfect place for her. Somehow, I think, even if she gets her ship back, she’ll be sticking around.

Ripley being excited about dinosaurs is the best. And completely in character with what we know about her.

While building the bridge together was pure Lumberjanes’ teamwork, they should’ve perhaps thought to look for the Selkies’ missing skins. There’s something else going on here.

I do love the idea of Molly becoming a steward of the forest like Bear Woman. Not that she’s going to be so thrilled about it; though it may be a better option for her than going home. We still don’t really know why she doesn’t want to go back, except perhaps she doesn’t have other friends. (Not to mention Molly’s budding romance with Mal.)

Speaking of Mal, her being so afraid of water and all her floatation devices were adorable. Especially when she emerges ready to face her fears only to find that they’re worse off. Not sure if being stuck in a water timewarp or getting stranded in the middle of the ocean, a random ocean that could be back in time, is worse.

The Selkies seem like they could be a little more useful. They are extremely useless here.

Love Ripley going after Mothra with Bubbles. And then getting kind of lost and separated from Molly.

I hope this solution is all Molly learning about her new fate.