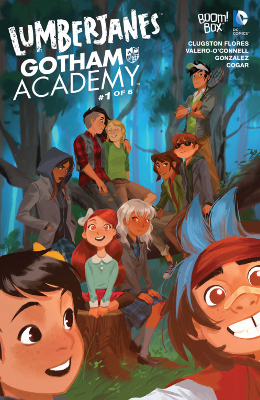 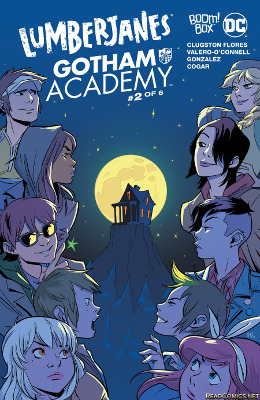 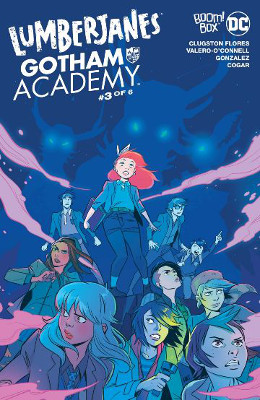 This is a cute idea. Both worlds seem to have enough supernatural in common that they could pull this off. Though Gotham is always a bit darker (even Gotham Academy) than the Lumberjanes’ camp. But I’ll wait until Olive becomes a giant human flame.

The mystery is intriguing and fits both worlds well. It’d be too much to take the Gotham Academy kids into time travel or with merfolk, and too much to take Lumberjanes superheroing. But a cabin the woods protected by creatures where Rosie and Professor MacPherson are trapped, perfect.

I’m looking forward to seeing how the kids act together. There’s already pulls of who should be in charge. Jen, always Jen. So I’m interested to see cross-team alliances.

The ghost creatures with sheep skulls seemed very Scooby Doo, and maybe that’s the tone that is in-between.

This book is cute, but it’s not my favorite. It’s entertaining and fluffy like some cotton candy.

The 80s details in the bedroom that Olive and Jen are transported to as pretty great. I like how they swiftly avoided any copyright issues too. Nice little details.

I’m not sure Valero-O’Connell’s drawing of faces is my favorite. For the most part, all the characters’ face shapes look the same. I really noticed this because of how she draws everyone’s ears. They all stick out in the same manner. Which made me them dig further into face design.

There are just too many characters in this book. So many so that April appears to have morphed into Mal and Mal is now in both the ‘back at camp’ and ‘at the 80s party’ scenes. At first, I thought it was a colorist mistake (hair, skin tone), but it’s clearly Mal’s haircut, which signals a penciling issue. Even if they did choose to change April’s hair from ginger to brown, April would be making a big deal out of it. This makes me disappointed that no one caught this. I’m going to be curious if this is fixed in the next issue.

Seems like the Lumberjanes would be more prepared to deal with spiders, snakes, and bats. I mean, okay, when the spiders all formed into the King Spider, even Frodo was scared. However, the rest of it seems like things the Gotham kids might be more frightened of. Well, maybe not the bats.

Clearly something happened to Louise’s parents that made her trauma more than people not showing up at her party. (Though I’ve thrown parties where no one has shown up, and it’s awful. And it wasn’t a conspiracy.)

I still don’t understand the motivations of those skull creatures for doing what they are doing to Louise and everyone else.