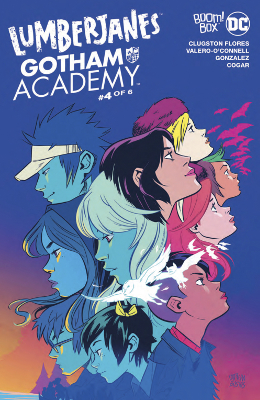 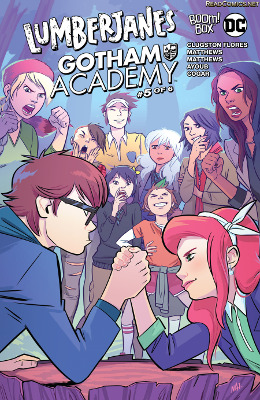 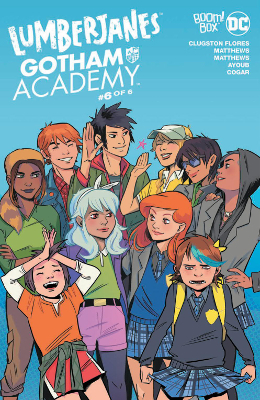 Oof! Well, at least they figured out that Mal and April aren’t the same character.

It very much bothers me that being released from this world depends on Louise being happy about a date. I figured out back at the first dinner party that Simon was dead. Especially since Louise managed to scramble up everyone else she knew as a teenager.

I’d still like to know more about the creatures who guard the house and prevent them from leaving. Did Louise conjure them up? Are they attracted to grief? Was this a mishap? They seem to both care for her and also want to be done with this. When they were floating to hang up party streamers that was pretty great.

Kyle is pretty terrible at being undercover. Like stick to your one job, dude. You had one job.

I’m still beyond disappointed that the crux of this mystery is hanging on a boy. All Louise wants is a boyfriend. Makes it feel like editorial took these normally two pretty progressive books back to the ’80s.

The Matthews’ art worked better to distinguish the characters. However, they had less details and less 80s’ flare than Valero-O’Connell’s pencils. This could also account for why they brought in two other artists to do this and the final issue. (Though I cannot say for sure.)

Molly and the bow and arrow were pretty great here.

Seems like a lot more rooms are unlocked now. Or that they would’ve found the taxidermy gallery before. Interesting to know that the blasts only knock people out.

This was a satisfying, if predictable ending to the story. They made Louise have her birthday, and wisely Kyle playing Simon coached her into wanting to live her own life and make her own rules. Not just pine after a boy. Luckily for her, Louise is still 16 and didn’t revert to being in her forties like the rest of her schoolmates.

I just realized that Barney hasn’t been in this miniseries! Where are they?! Would this be too much for the gender binary ’80s?

Maps and Ripley would 100% be best friends, so I’m glad that happened.

It was cute how Pom hated all the ’80s TV shows.

Also loved the scene with Rosie and April tying up the monsters. Who seemed to get rather less scary by this last issue. And not just because the characters figured out how to contain them.

It was a very neat ending that Louise’s parents were the ones who conjured everything up. Hopefully for Louise’s Paris dreams, they also left her some money.