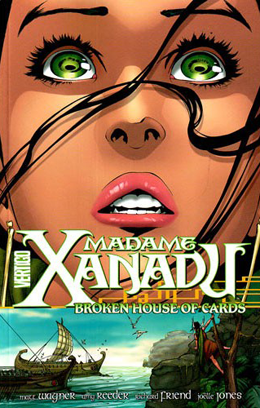 Madame Xanadu was back in form for this volume. Reeder’s art was a re-welcomed addition. She just captures Madame Xanadu and her world so wonderfully. I love the facial expressions and the angles. Friend’s art was also a nice addition to the story.

I loved this 1950s story. It felt right for the era. The focus on the suburban wackiness. The need to have all the newest appliances, the perfect relationships, the dresses, the sexist gender roles, and of course, the casual obsession with Satanism. I adore that Madame Xanadu takes the latter with a grain of salt. She knows this is not “Satan” probably because she doesn’t believe any such creature exists.

I was so happy that Morgana made another appearance in the comic. I’d been waiting for her to come back ever since the first volume. She’s so wicked.

The flashbacks were awesome. I love that we got to back to Nimue’s world and to see the two sisters growing up together. Morgana seemed to be a natural trickster, and for some of her more evil acts in the 1950’s story, she really needed that extra motivation for her character. I also enjoyed the contrast of when Nimue was more passive about her interactions with humans. Or at least, trying to stop Morgana.

Probably my least favorite part of this tale was the inclusion of Martian Manhunter. He seemed a little too much the mysterious man who came to give the right answer and help out at the last second. Plus, with his insistence on hiding his identity, Martian Manhunter and Madame Xanadu didn’t make a real connection in their story.

I’m glad that at the end of the day, Betty Reynolds lived. Hopefully, she also now knows how to make her life better.

The single issue at the end was definitely interesting. I like seeing Madame Xanadu use her powers to help normal citizens. In a way, she hasn’t really had her own story where she goes out to save the day without the aid or interference of other metas.