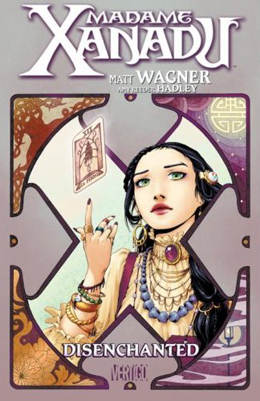 Madame Xanadu starts off as the young Nimue Inwudu in the world of Camelot. She is the sister of Morgana le Fey and Vivienne, the Lady of the Lake, and they are descendants of the elder folk, each on having magical powers. Nimue is particularly connect to the earth. She’s able to foresee the future by using nature.

Nimue is also the lover of Merlin. However, she eventually finds out that Merlin’s influence on Camelot is causing its downfall, and she’s determined to keep the peace and the forest that’s her home. For the first time, the Phantom Stranger appears to her and tells her that Merlin’s using her for her immortality and tells her how to trap him. However, when she does, Merlin curses her with the last of his power and strips her of her connection to the Earth. She’s still a witch of sorts, but she’s not longer as powerful as she once was.

And then the tale takes off through the centuries. Wagner is particularly masterful in spinning each story — which could’ve been a whole arc itself — into a couple of issues. He also does a wonderful job at the development of Madame Xanadu’s identity and her relationship with the Phantom Stranger. Likewise, Hadley does a great job with the art and the different time periods.

Madame Xanadu’s tale goes from Kublai Khan’s court to Marie Antoinette’s table and to the Jack the Ripper murders and finally to the 1940’s. She goes from wanting to know more about the Phantom Stranger to determining that he’s meddling with her life and the progress of history in a bad way.

Wagner also does a great job at weaving other DC characters into her world. Madame Xanadu goes face-to-face with Death and wins back her life. She also becomes the lover of John Zatara. But it’s clear that her greatest focus is the Phantom Stranger.

As she binds him with magic, the Phantom Stranger’s unable to prevent the creation of the Spectre. And I imagine that the next arc will deal with Madame Xanadu’s horror and repentance at allowing the Spectre, the spirit of vengeance, to come to Earth.