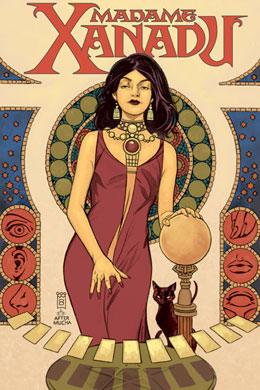 I appreciated this as the long form of saying goodbye to the Madame Xanadu comic book and Wagner’s time with her. And I can say that I greatly miss his take on her character, especially given how horrible the reboot has been with the magical characters. (It’s not their powers, but their back-stories that make them interesting.)

I enjoyed that the stories varied in how Madame Xanadu could really help these characters. Some needed her to calm their powers. Others needed her to stop the evil around them. Some accepted her guidance and others rejected her or were forces of evil she needed to banish.

Each story really reflected 1963-1966 and the different facets of culture from that time, depending on who you were or where you were. The variety of art was just gorgeous. In a lot of other stories, I might’ve been throw off by the switching artists. But the choices here just enhanced the book.

Rosalyn Mays’ story was a great exploration of how Madame Xanadu inspires other to take charge and change the future. She’s a character who doesn’t give up, and when Rosalyn starts seeing people’s tragic deaths, before they die, teaching her take charge was a brilliant way to show this.

Spencer Wilkins just couldn’t take her advice. Here, Madame Xanadu tries to help, but at the same time, she’s more resigned to let him make his choice or not to heed her warnings/solutions. McCubbin’s art is awesome. (Someone should hire her to help with Mad Men promotional materials.) Spencer’s choice to ignore Madame Xanadu is a perfect reflection of who he is — a big shot ad man — and a culture where men like him didn’t listen to women.

Sammy’s story was definitely the saddest. I liked that Wagner built up the suspense of the reader not knowing what’s going on. After all, we know he lives on the street, so it’s not like he wouldn’t smell. Zullo’s art is brilliant. Especially when Sammy’s dreaming about exploring the stars and saving alien princesses. I love how Madame Xanadu finds him and shows him empathy and mercy.

Blue’s story was interesting too. Though every mention of Randy Warsau and the Foundry was pretty funny. Same with Roosevelt Coates, The Portals, Ron Jameson, Evie Hardwick, Veronica S. Witnesses, etc. But a good take on the Factory scene from the perspective of the DCU. (I totally appreciate that Wagner called on us to use our brains to make the connections here.) Blue’s use of drugs as a succubus was smartly done too. I loved that Madame Xanadu didn’t just come to kill Blue, but to end her long life and suffering.

Charlotte’s story is definitely my favorite. I love Madame Xanadu taking an apprentice. That she sees into the future and knows that superheros are coming. But sees that Charlotte’s powers are like her own. Poor Charlotte got more than she bargained for when she took that acid. And worse, the doctors of that era just thinking she’s having “female troubles.”

I also appreciated that Wagner closed up the chapter of Bette’s life (and made her happy, eventually) and the Phantom Stranger. I think Madame Xanadu finally gave him her answer of where she was going to be in this brave new world. I really miss this title.