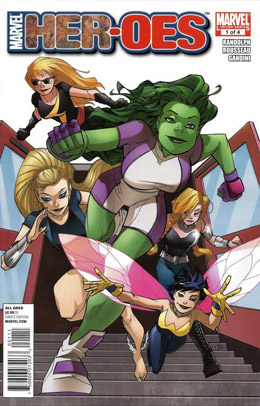 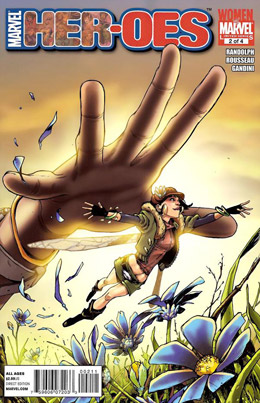 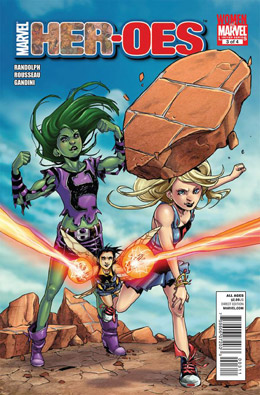 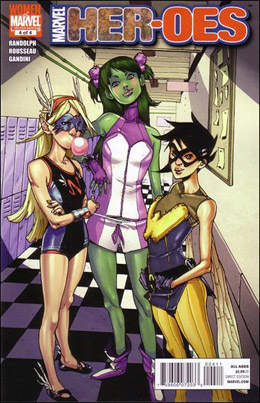 This comic book is clearly written for a young teenage girl audience. I’m not that audience, but I appreciate having this book out there, and even as someone who’s far closer to 30 than 15, it’s well done enough that I enjoyed it. I found the art very enjoyable and appropriate for the comic.

Her-oes is from the point-of-view of Jan. Here Jan has wings and shrinking ability without the help of Pym-particles. Of course, her superpowers are her big secret. But she’s not the only one, her best friend Jen Walters also hides her Hulk-powers and Namora hides her super-strength.

In a way, superpowers have always been the perfect metaphor for the teenager: feeling alone with a changing body.

I’m not sure how I feel about Jen being the hippie-dippy one. I’m not sure this is the teenaged Jen I’ve imagined. But I definitely see her as an outcast due to her brains — and her hulking ability here.

I loved Jan as the fashionista-to-be. Her tiny doll and tiny fashion world in her locker are too perfect.

I don’t really like the fighting-over-the-boy plot. I just think there could be more information conveyed about them without having them arguing over boys. Of course, with Namora’s reveal of superpowers, I do think some other issues might come up.

Here Randolph writes the full reveal of Janet finding out that she’s not the only weird one at school. Specially that Namora, the “queen of mean,” has some superpowers of her own. I really like this play in a comic book written for teenagers. Because even if they’re mean to you, even the “popular” kids feel weird and awkward during this time in their lives.

There’s no surprise that Janet breaks her mother’s wishes and goes to her father’s lab. I keep wondering what teenaged issue Randolph’s trying to make a metaphor of by having Janet’s parents refuse to talk to her about her powers or how she came about them.

I love how both Janet and Jen can’t quite control their powers. Very teenager. Also how jealous and upset Jen gets when Janet and Namora seem to make friends to bond over their shared odd powers felt just perfect here. And, of course, the inevitable fight. Both Randolph’s writing and Rousseau’s art combine to make it really about three teens, who happen to have superpowers, throwing it down.

I love Miss America showing up as an agent of the government in this story. While she explains the rules of this universe and how they deal with metas, she doesn’t stumble up the plot. That’s some great writing on Randolph’s part.

Jan is perfectly characterized here. She may be a fashion designer, but she’s also a hero in the making. Jan knows that locking up Jen is wrong. Not just because Jen’s her friend, but because she believes that Jen can control her powers. (And those of us who’ve read She-Hulk comics know that Jen eventually does just that.)

I love the teenage girl snark as they team up with Namora to save Jen from being taken away by the government. But I also love that Namora trusts Namor to be there to help her out. And is caught off-guard to find herself home alone (with Jan and Jen) and having other metas (seemingly bad ones) wanting Jen themselves.

Overall, this miniseries was adorable. I loved how the young women all came together. Randolph has a very good understanding of teenage girl dynamics. But did a nice balance of adventure and teen-hood, for those of us that might not want to be reminded of being a teenage girl or never were.

Jan whipping up outfits for both herself and Namora to hide their identities was perfect. I love that Randolph and Rousseau made Moonstone, Ghost Shocker, and the other not-introduced male villain seemingly young too. This made it a much more even fight.

In the battle itself, I adored Namora’s wit with the water and fighting an electrical-based bad guy. And Jan confronting her fears of not being good or trained enough to fight. Rousseau’s art matches with the action perfectly.

The ending was brilliant. And restores the balance for Jen, Jan, and Namora. Finding out about Carol’s powers and about another superhero in their high school worked excellently.