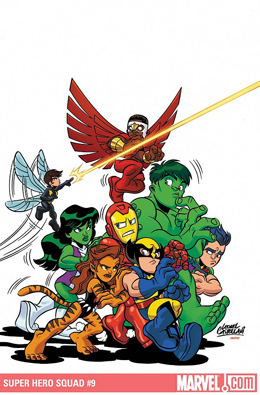 So they finally decided that adding girls to the team would be a good idea. It only took them nine issues and half of a season of the TV show. Congratulations.

Marvel really has a naming problem when it comes to all-women teams. I mean, Squadettes? Really? Of course, I was kind of okay with it once they started calling the boys’ team the Squaddies.

I loved She-Hulk, Tigra, and the Wasp saving the kids at the zoo from an angry rhino, and then being upset when the boys show up and get all the attention. The little contest the girls rig up to beat the boys was rather entertaining.

I also liked the touch of the Hulk crying while watching Bambi. I think it goes along way for boys and girls to show that it’s okay to be sensitive and get upset when you’re a boy. Even a tough character like the Hulk.

The adventures to find the fractals from the Infinity Sword were very entertaining. What’s funnier than the Hulk lifting up cows? Or the Wasp fighting with Redwing over a fractal? Or She-Hulk getting into a competition with Thor over who’s stronger and can lift more train cars?

The invisible hand taking the fractals from the villains who’d snagged them felt very much a kids’ plot. Enough mystery that they might be surprised, but enough clues, they might figure it. I loved the Invisible Woman flying in with the villains tied up and the fractals in tow. I also enjoyed how she stuck with the girls and so did Ms. Marvel. Which I think teaches girls an importantly lesson about having each other’s backs.

The Contest by Todd Dezago

I wasn’t a big fan of this one. Probably because belching humor is not my brand of humor, and eating contests (Hulk vs Thing) just make me sick to my stomach and never wanting to eat again myself (and that’s just watching them). I do, however, think that the story would be entertaining for a kid.

I also thought that Dezago did a good job at showing the neurotic tendencies of Reed Richards, but on a kids’ level.

I had mixed feelings on this story.

On one hand, Enchantress was being excessively mean to the Mole Man. And it’s a good lesson for kids to be polite and not cruel to others.

But on the other hand, Doom punished the Enchantress because she turns down the Mole Man, who’s trying to date her. Does she do so rudely? Yes. But the story doesn’t make it clear that she’s in trouble for being rude. It also looks like she’s in trouble for telling the Mole Man, no. Which is the complete wrong message to send to children (or adults) about everyone’s right to say “no” and be respected.