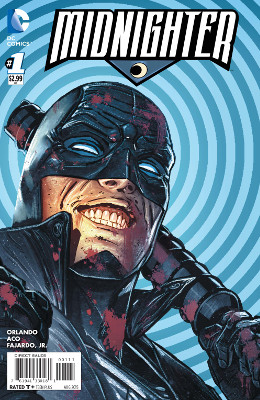 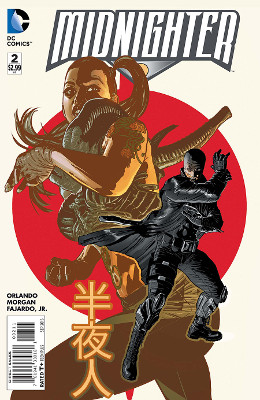 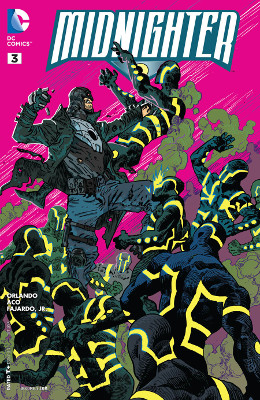 I’m actually much more pleased and excited by this book than I ever expected to be. Perhaps because Midnighter’s one of my very favorite comic characters, and he hasn’t had a really good story in a long while.

I do think integrating the Authority, Stormwatch, etc, by putting a single character in one book or giving them their own title seems much better than a whole book riding on their viability. They still don’t make sense in the larger DCU, but what’s done is done, for the moment.

While we haven’t seen Midnighter’s full costume, not really, it’s looking much better than the initial New 52 redesign. He has a nice element of street, which is really essential with his backstory. I loved the detail that Orlando gives where Midnighter can’t really sleep in a bed.

So happy that Orlando’s not shy or playing around with keeping Midnighter gay. It was refreshing to see him out on a date and having sex like an adult. Jason was a good, well-rounded character too. And I was okay with the explanation about Apollo being out of the picture. Mostly because it sounds like he might be back at some point.

Interested to learn more about this Gardener (very Wildstorm). And there’s always a file.

Oh, Midnighter, he always come on just a little strong. Matt seems a little more into that than Jason was. Of course, being saved by a superhero and then going on a date with them is a little different than meeting them on an internet dating site.

Also interesting to see where the tech ends up that was stolen from the Gardener: Marina. It raises a big question as to who stole said tech and what their purpose is. Midnighter’s much more comfortable with being the judge on people’s actions and killing the bad guys. As long as you don’t kill the innocent…so there’s that.

That said, Midnighter’s going to get himself into some trouble with flashing the doors, his place, and all. It’s nice to see Orlando paint him with a big wound on his soul. Oh, Apollo.

This book felt very balanced as a solo superhero story. Loved seeing Midnighter both in and out of his costume and with friends and lovers and then fighting the bad guys. Not so thrilled on the ending note of him going toe-to-toe with Dick Grayson, but I suppose that’s the DCU for you. (See my pun!)

Loved Midnighter beating the villain and his protection. Plus, the young girl he saved questioning if he was a good or a bad guy. What he said to her mother was pretty great too.

Matt seems like a good guy. Though he also seems like a stand-in until Midnighter’s ready to be with Apollo again. (Also, I thought Apollo had the same backstory as Midnighter…) It is nice to have someone also function as the stand-in for the audience and asking Midnighter all the things we want to know that when you start dating someone you’d be asking.

I like Midnighter’s friendship with Tony and that Jason is now his friend too.

Midnighter Vol. 1 is pretty great. You should read it.