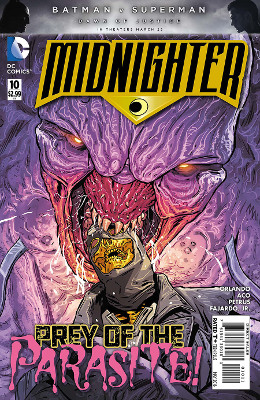 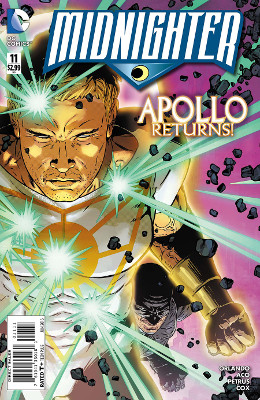 Seems like Amanda Waller should’ve kept Afterthought around. It wasn’t like Midnighter wouldn’t escape. Of course, it could’ve actually been part of her plan. Who knows what she actually thinks of Bendix and having him around. Because Waller essentially has the same personality traits, it seems like she would see him as competition.

Deadshot is always a jerk. I’m surprised that Waller hasn’t killed him long ago just out of annoyance.

Well, I don’t know if I’ve ever seen Midnighter destroyed to this many probable pieces. Of course, it is a comic book and the explosion doesn’t mean he was still in the craft when it exploded. There was no “body” as it were.

I realized when I put this book down that I was grinning ear to ear. I’m pretty sure that happened after the first page.

Ecstatic to see Apollo back. Heart warmed that Midnighter called for Apollo, and he came to the rescue to save Midnighter from actually dying. And then took him back to his house and care for him.

This is total h/c. (Hurt/comfort after a no-holds-bar beatdown.)

Sorry if this review is not deep and awe-inspiring.

I do like Waller — as I can like morally bankrupt characters okay — so I’m hoping she also has one up on Bendix.

That was also a pretty good takedown of Afterthought.

I had a really hard time reading the end of this series. And I did some procrastinating and some ranting about how much I love Midnighter as a character in general. Then it was announced that Midnighter and Apollo are getting their own miniseries in the fall to be penned by Steve Orlando. (I’m crossing my fingers that it becomes more than just a miniseries. Put your pre-orders in, people!) Woohoo!

Much of this was not a battle with the Unified. Instead, it was a battle with Unified’s creators, Amanda Waller and Henry Bendix. After all, they are the characters with wider backgrounds, who we’re much more familiar with. Which is fine. I don’t know how much notice Orlando got about the series coming to a close and how natural this ending was.

I could definitely read a series of Waller vs Helena.

I don’t know if it’s the art, but Apollo comes off as a lot younger than Midnighter in this series. Maybe it’s the inner knowledge that Midnighter has gained about himself and about the work he does as a hero. Or again, maybe it’s just the art.

I love, love the acknowledgement of the power of community that Midnighter’s formed around him. And how Andrew doesn’t really know anybody and Midnighter introduces him to all of them works brilliantly to show that off.