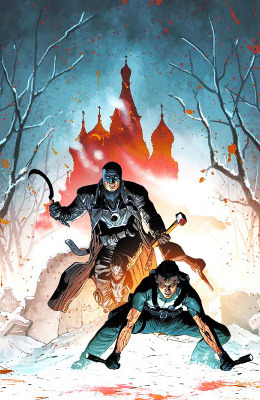 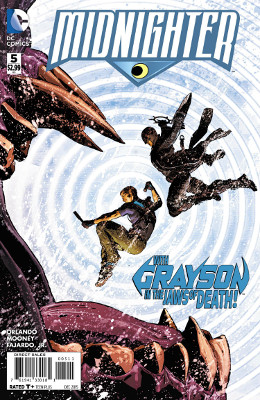 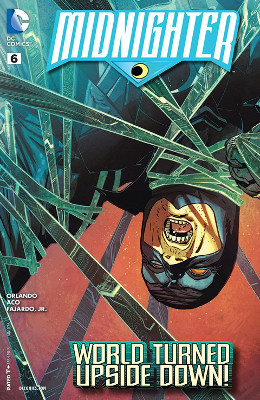 This book reads like such an indulgence, which really means that I’m loving every single bit of it. While according to GLAAD, they’re going to stop counting queer TV characters because there are so many (read: there are enough white gay men), comic books are still not this way. Or they are getting there. And bringing Midnighter back, a white gay man who in this issue karate chopped a man’s head in half at his forehead, is indicative of change. Now, we’ll see how long the book survives and if DC finds its sales enough.

In other words: read this book!

Loved Midnighter’s and Grayson’s dynamic. Orlando gets how to make Midnighter be able to joke around, but be serious all the same. The crack about Batman was brilliant. Same with letting Grayson deal with the bros in the sauna.

I also enjoyed the humanity Orlando brings to these stories. The newly hatched “vampires” begging for their lives back as douchebros kill them was harrowing. Same with Midnighter and Grayson’s debate over what to do with them and the utlimate boobytrap.

Mooney’s art was great on this book. Loved what I’ll only describe at the over-the-top gay male gaze put on Grayson and Midnighter as they enter the sauna. Though I’m surprised there wasn’t more Nightwing butt, just lots of abs and ab comments from Midnighter. Mooney’s layouts also nicely conveyed movement and switches in story POV. I want him to stay on this book.

At first, I wasn’t so sure about them finding Akakyevich so quickly. Or seemingly so quickly as it looks like the next issue. However, Orlando’s clearly got a knack for telling human stories and Midnighter finding out about his past is as human as it gets.

And, of course, Akakyevich is only the middle man. That wasn’t surprising. It was all too quick and too smooth. Terrible to see the experiments, and I’m imagining that the person at the center of this mystery may be the one who “created” Midnighter.

Still enjoying Mooney’s artwork, but his layouts weren’t as interesting in this issue compared to the last one. Which was very much setting him apart from the other artists on this book.

Grayson was definitely annoyed with Midnighter by the end of this issue. The handcuff thing was a bit much, but always Midnighter proved himself to be correct about his methods.

While I’m sure Grayson’s organization cleaned up the secret lab, it would’ve been nice to have some acknowledgement of the afterward. Not every creature came after them.

The Thanksgiving scene with Matt and Midnighter was sweet. I really hope that it doesn’t end with one of them getting shot in the head. Though if his powers are still the same, if Midnighter is the one shot, he’ll likely come back to life or anticipate the sniper. Doesn’t mean that won’t be traumatic for all involved.

Wow, Midnighter and Matt’s relationship seems to be progressing from the honeymoon phase to the endangering family because he’s a superhero phase.

I loved the meat tenderizer so much. Though I did think it was too much to show the close up on the tool in order to read the label on it; just make comic book fans who don’t cook figure it out. Just saying.

I’m betting that Matt got changed into a bio-bot or whatever when Midnighter made him leave after they were almost hit by the bus. But wow, killer emotions right there. Midnighter just might kill some assholes.