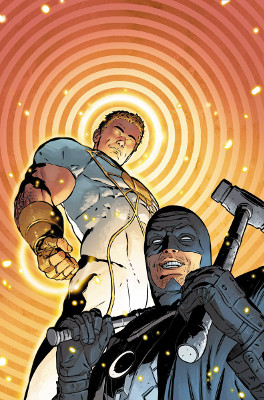 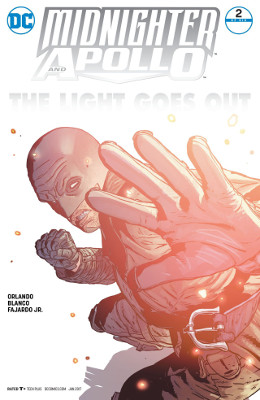 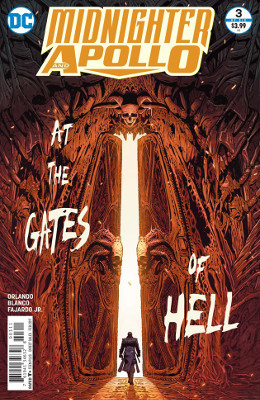 I’m so glad to have a Midnighter and Apollo book back on my reading list. They are the very best. I’m also excited despite Rebirth that Orlando gets to tell more stories about them and that their previous adventures under his pen weren’t erased.

Blanco’s art isn’t my favorite. I do hope that it improves the more he pencils this book.

Midnighter and Apollo seems a little less explicit — both in violence and in sex — than the solo Midnighter title. I’m okay with the violence tone down, but the sex makes me sad. More sexy scenes please.

I enjoyed that Midnighter also still has his friends. I do wonder about people coming into this book without reading the first two volumes. Which what the fuck, DC, why did you publish issue #1 of this book before you released Midnighter Volume 2? Explain to me again your lack of marketing strategy?

Though Midnighter is still dumb for going after Henry Bendix. Like Bendix wouldn’t be ready with a plan. Even with Midnighter’s computer brain on, it’s Bendix.

I’m not so sure about this demon magic gun, but I assume Midnighter will be on a mission to hell to rescue Apollo. Or a demon dimension. You can never tell right away with these books.

So Midnighter is going to hell. This is what I figured in the last issue of the book.

I appreciated Marina telling Midnighter that she’s there for him. But superheroes rarely accept the death of loved ones since no one really dies. Why does Midnighter think the sun lamp will work Apollo’s dead body?

DC also has many versions of hell, but they are almost all the same. Whether Lucifer, Hades, or Neuron is running the show, they’re closer to Judeo-Christian interpretations of eternal damnation than anything else. Even Apokolips, which is a planet, rings of one view point.

I like Orlando a lot. And I hope that Orlando gives us something new we haven’t seen before. However, Midnighter descending into hell means that the wonderful friends he’s made won’t be at his side. Adore Orlando digging into DC’s history and bringing back Gregorio De La Vega. I assume Suri is Shun.

Apollo plays a game of sins against Neuron. He seemingly loses as his light goes out. Made me think that Orlando also spend some time in Christian religious schools. Too much history of sins and moral arguments.

Blanco drew a nice little shout-out to Cain and Abel in Sandman.

Ah, Midnighter bringing only his fists to a gunfight. I bet that bullet will get shoved into a skull either way.