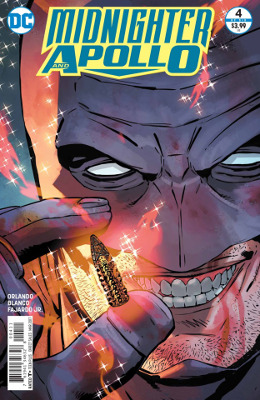 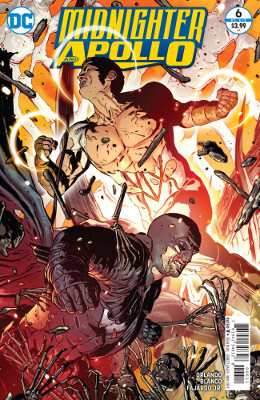 No one is surprised to see Midnighter shove that bullet through Mawzir’s head. No one. Blanco’s two-page spread was perfect here. This certainly brings us back to the violence of these books. Midnighter doing some damage to the Lords of the Guns was pretty satisfying too. It’s my 2017 mood.

DC does have a thing with queer characters having to go to hell to rescue their lovers (see Knockout and Scandal Savage). I expect Kate to be on the hunt for Renee soon.

I don’t believe for a second that Apollo lost his soul in a bet with Neuron. That answer was too obvious and too self-righteous. That’s not who Apollo is.

I just love Midnighter who’s covered in blood and ready to fight again with Neuron, even if he’s already injured, and if I remember right, there’s something about a time limit in hell.

Oh, this portrayal of Midnighter’s heart. He clearly didn’t care anything about his own safety, but wanted to rescue Apollo, his love. (Of course, we could also argue that maybe Apollo wouldn’t want to be rescued if it meant an end for Midnighter.)

The art during the fight scene was some of the best in this book. The blood added just enough gore, but was also more like paint and kind of everywhere. Loved the light-up action on Midnighter’s costume where the sun peeks over the moon. Bless.

That candle is quite far down in burning.

It’s pretty unsurprising that the entire fight and Apollo in some kind of cage nearby was an illusion created by Neuron. However, Apollo is on the loose. We just really don’t know how. I’m betting that he did actually win his bet with Neuron, and if there’s one thing about hell, a deal is a deal. (Even if this isn’t how evil works at all in the real world.)

I did love Apollo’s story. I totally called it that Andrew naming himself Apollo had absolutely nothing to do with the “god” part. Neuron would think it’s the power that attracted him to the name. Because Neuron wants power above all.

Of course, Apollo would fly through all of hell to get to Midnighter. After all, Midnighter fought his way through hell (not to mention did magic to get there) for Apollo. And beat down Neuron.

I’m all for the smoochies and then jetting the hell out of hell. Always convenient to have a character who can fly. It is the optimal way to get away from zombies quickly.

I found the change of artists to be incredibly distracting. I was not a fan of Fajardo Jr and Rauch’s collaboration. I wanted some sexiness, but instead, blocky characters with weird hip proportions. Seriously, DC, you couldn’t have published the last issue a week or two later to have consistent artists.

I’m glad we did get some time with Gregorio, Gregorio’s family, and Tony. However, it was missing Maria. But Midnighter and Apollo did deserve a bit of a vacation post-hell.

Overall, this miniseries wasn’t exactly as strong as Orlando’s Midnighter books, but still an enjoyable read.