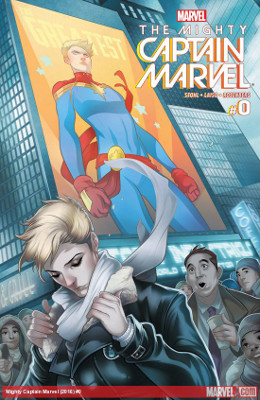 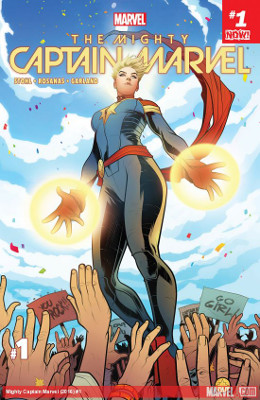 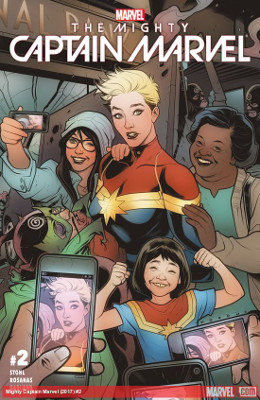 Carol seems to be getting back into form, after the bad Civil War II Marvel firesale on its and Carol’s brand. I loved Carol’s dream about just hanging out with the superheroes she cares about, even the ones who aren’t talking to her at the moment. It was a pretty bad dent to her character.

Flerken. Flerken. They are like babies. (And no one with a child ever wants to hear that.) When Carol gets baby spit up due to Jessica’s dirty clothing that was some mom of an infant realness right there.

Wendy and her poster cracked me up. Though I don’t know who’d want to be part of the Carol Corps now.

Brand remains the best. I’m so glad she’s actually back in this book. The comfort scene was hilarious.

Loved seeing Carol with the refugees and protecting them. This is the kind of message that 2017 needs.

This book continues to try really hard to redeem itself and to redeem Carol. After she went from such an inspiring character to a fascist willing to lock innocent people up. However, the only real moves we see so far is Carol making up with Jessica Drew and having no other friends. Well, Alpha Flight and Agent Brand still talk to her.

Stohl’s writing is solid. She’s bringing nuances back to Carol that were unfortunately lost in the last chapter of Carol’s adventures. She’s poking fun at Carol’s vulnerabilities. That TV show was too funny, and I loved that the only reason Carol’s allowing it is because the money goes to help the alien refugees. Stohl’s making the story very relevant to our world. Except that all the refugees are from outer space.

I love Carol’s new look under Rosanas’ pencils. I really do hope that they finally make Carol queer. However, even though he added pouches to Carol’s sash, the sash still looks ridiculous. It’s just so dainty, and it doesn’t need to cover her bikini area since her costume doesn’t expose it anymore.

Yeah, Bean definitely knows English (especially with that universal translator). Carol’s very trusting of her considering she took her to probably what’s a classified and secure meeting.

I’m greatly enjoying Rosanas’ art on this book. It’s refreshing and uplifting. Characters are drawn differently from each other, and he does a hell of a job drawing a flerkin.

Stohl’s plot highly hinged on the “Carol just can’t take a break to think clearly through her current problems and that’s why they are getting worse.” Now that there’s no more TV show, she might have a few more moments. Or a lot if they all end up out of work with no funding.

I do raise my eyebrow at Carol having yet another health problem.

I still feel many of the secondary characters are completely underdeveloped. Even Carol’s relationship to them. The joke that the TV show was okay with combining Sasquatch and Agent Brand into a giant green-colored dog highlighted this feeling, even if Stohl meant for it to be a commentary on film compared to source material.

I do want to know more about Bean.