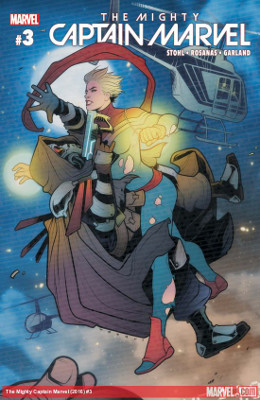 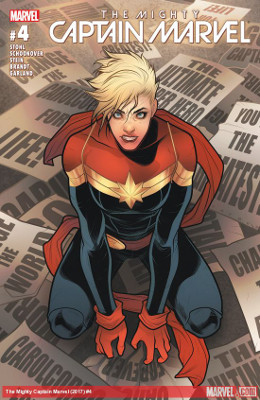 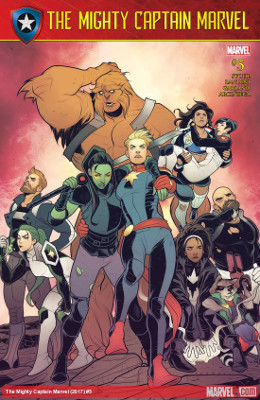 There was a lot about this issue that I really enjoyed. However, the ending made the tone feel disjointed. Particularly Carol’s fight with Sim, and then Carol carrying Bean, after she knew that touching Bean would mean explosions with her own powers.

The introduction to this issue was beautiful. Stohl has a lovely way with words, and I love her bringing Carl Sagan into this pop culture setting. Rosanas’ art layouts sing with the words. I loved Carol trying to figure out what she was, and how she deals with knowing so little about herself and her genetics. There’s an argument to be made that we, regular humans, know so little about our evolution and about how our own bodies work (particularly our brains), and we deal with this as part of our lives. So, of course, Carol can deal with this too. But if I had powers, I’d want to know more.

Carol’s interactions with TAI were interesting. There was a balance of how she feels about Tony, as her friend, and the cognitive dissonance of knowing that TAI really isn’t Tony, but just an AI. Stohl’s interjections of humor felt spot-on for both characters. It’s nice to have a writer who can make Carol laugh.

Alpha Flight was well-used here. They were there and helping, and we got to see their personalities.

Hooper’s crush on Carol was more celebrity-struck than Wendy’s crush on Harper. But harmless all around. It is surprising that no one on earth is studying genetics from aliens yet. Seems like an oversight.

As much as it felt off for Carol to carry Bean and expose herself, Rosanas’ art and Michael Garland and Marcio Menyz’s colors made is beautiful.

Dear Marvel editorial (also applies to DC editorial), when we’re four issues into a book and you’ve assigned three artists to finish an issues to get stuff done, I assume you have no faith in this book continuing. I assume this was done because well, you’ve already hit ‘purchase’ on the ‘no returns’ package and it’s in transit.

This book suffers from three artists. These artists aren’t even coherent with each other. Each style is unique. Not all styles mesh with Stohl’s writing. This is a mess. This makes an otherwise solid wrap-up of a plot, messy.

I did like the ending. I like the situation around why Carol was getting so much power. About how Bean was special. And how both Bean and Carol were the heroes here. I continue to enjoy Tony AI.

This book. This book is a bit of everywhere. This seems to be another crossover. Maybe. Kind of. Sort of.

Did Steve just punish Carol by banning her from Earth? And also banning her entire team, including these three new young adults in training? And possibly also making sure they die at the hands of the Chitauri?

The big problem is that Stohl hasn’t addressed the larger problems in Carol’s character. More directly that she has made far colder and more fascist calls than whatever is happening here. Civil War Carol would’ve agreed with Steve.

Couldn’t America punch them all out of this situation? She can literally travel dimensions.