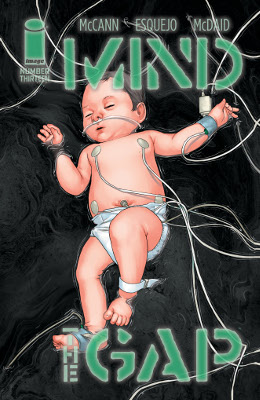 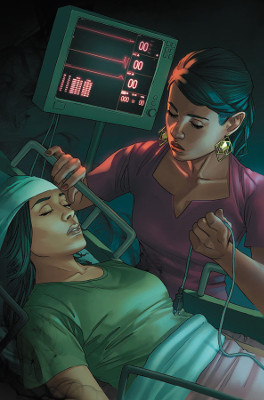 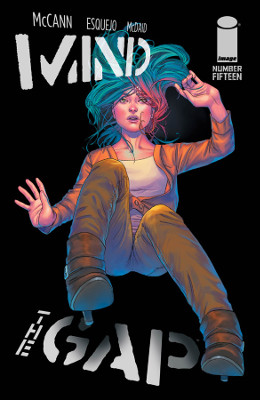 This book’s getting really good. I’m a big fan of how deep we’re finally getting into the mystery, and I’m always in awe of writers, like McCann here, who take real science and start applying it to future speculation. I’m not sure I could do that in any of my stories. Or at least in ways that wouldn’t make people, like myself, who aren’t scientists, but know enough to point out silliness.

So if they’re trying to put people in cryostasis, would the only point then to be to put folks who are sick into it in order to preserve them until a future time when their disease has been cured? I’m pretty sure I saw what happened in that Star Trek: TNG episode.

McDaid’s art wasn’t my favorite in the flashbacks. I’m not sure what exactly I didn’t like about it, but it almost seemed too much like a different book. In fact, when I hit the first past scenes, I wondered if there wasn’t an long ad randomly inserted in the book.

I really love the twist that Elle injected herself with Jarius. I didn’t see that coming. And clearly, no one else did as Eddie told the story of what happened in the subway.

The countdown clock makes me assume that this title’s coming to a close shortly. I should poke around to see if there’s any estimation on its ending. Or at least to the point where we have to wake up Elle.

Glad that Geller’s there to help.

Less than intrigued with the continuing story of Erik. He feels all guilty about the deaths of the babies and of Nora, but clearly, he continues to do his experiments and kill his granddaughter over and over again.

So the first time Elle died was when she was born. Seems odd that Eddie Jr. wouldn’t have a similar issue. Or is it because Elle died and was brought back to life that makes her different?

I’m a fan of Elle remembering all this stuff.

I’ve been surprised that they kept Elle in the hospital for this long. I suppose there’s been some attention of others, namely doctors and police officers and Jo. So it might be hard to move her.

I am curious to learn more about the final dose and what it would’ve meant. Or what Erik was hoping it would actually do.

The stories of Elle dying and then being resurrected were not as intriguing as I’d hoped that they’d be. I do think they go at least part of the way of humanizing Ed and Min. They both obviously care about Elle’s well-being, and they seem to want to find a cure for her more than solving death like Erik.

Mostly, I felt that this issue was a bit of filler while we want for the next one. Filler with Elle’s death. But filler, none-the-less.

Visit Elle’s death and buy Mind the Gap Volume 3: Out of Bodies