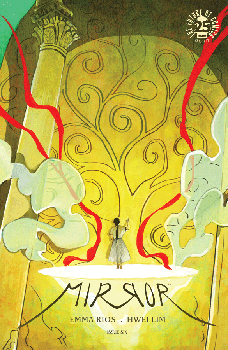 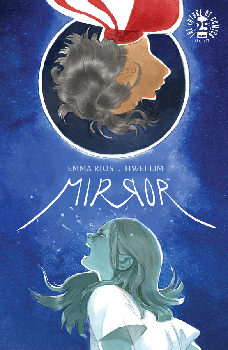 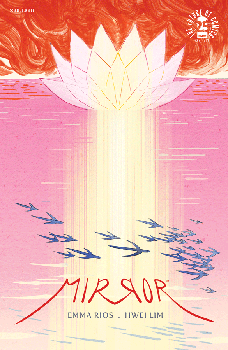 My first question is if these stories will in any way be linked together. Unlikely is what I’m seeing. No, we’re likely in just a different world, a different part of the solar system. But at least there’s some shortcut summary to make sense of the setting.

Ninua is curious. She’s an apprentice who wants to be an artist. But her curiosity gets the better of her. When Ninua’s breathing mask falls from her face, she believe she’ll survive in ether like the Elder (rulers or gods, or both). But from what happens, it sounds as if the Elders transformed through the gas and so does Ninua.

Of course, she also may be something else entirely.

Especially when we see Zita die. I do hope that we get more backstory.

The art in this book continues to be magnificent. The two styles that contrast against each other to show time works brilliantly, and the action just flows due to the art.

So we’re heading toward a meeting of the first volume and the second volume.

Ninua may have been granted her life. But I don’t understand why these gods would do that if they knew she had one of these universe seeds in her body. This doesn’t make any sense. You’d think they’d want to keep the destruction of the universe wrapped up in a safe place.

Oh, Elena, she’s always getting used. And in many ways, it seems like she likes getting used. Or likes putting herself into places where she almost dies.

Of course, this mission goes horribly wrong. Who could’ve predicted that? Oh, wait, like everyone ever.

This book is so ambitious and that is its downfall. Too little, too late, Rios and Lim decided to explain this world. To share directly about Synchronia as this paradise, about their immortality, about how they control every aspect of the universe and push out those who don’t quite fit. Like Kaz, Beserion, and Elena. Especially if the first two were believed to be dead.

I believe issues #6 and #7 were supposed to take place in the past when Elena was younger.

If Elena was a misfit than all those animal humanoids are certainly misfits. And we see the “othering” of them by the Synchronians and the stand-ins for ICE/TSA, who almost shoot the mountain lion who yawns. Heavy-handed and no doubt highly influenced by the current state of the world.

We also get a glimpse back at Irzah, and I have to think if it’s still in play, perhaps they will go back. Especially the children of Irzah, the animal humanoids.

But if this is an environmental tale — even with this seeming refugee tale shift — is this how Synchronia isn’t actually a paradise? How it’s actually fake, and how this type of perfection is actually destructive?

The more I try to figure out this book, the more it seems to disappoint.