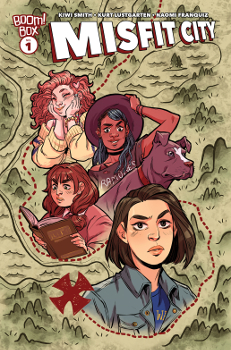 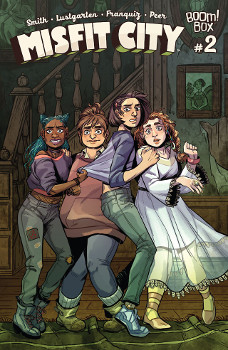 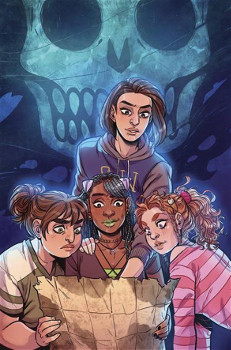 My biggest beef with this book is Franquiz’s cover art. It makes Misfit City look like a rip-off of Lumberjanes, which is certainly one of Boom’s most successful titles. Now in a perfect world, we’d have many, many stories about camps for girls and coming of age. But it feels like Boom is trying to cash in with the Lumberjanes audience to try a new book based on the cover.

Misfit City is not Lumberjanes, and that is a good thing. Misfit City is about young 20-something townies in a small Oregon coastal town. [This is later more clarified that they are high school seniors.] Clearly, based on Astoria, Oregon, particularly the Astoria depicted in the movie, The Goonies, which Boom doesn’t have the rights to talk about the movie. So instead, we have The Gloomies.

I like all these women who are just trying to live their lives. They are quite out from under their parents, but they seem to be young adults rather than young teenagers. As much as I love books with younger girls for younger girls, it’s nice to have slightly older main characters.

Smith and Lustgarten lay down little bits about their personalities here. We get Dot, who’d rather read a book than pick oysters. Mace, who is the cool musician with the film museum job, and the one who ultimately saves the map. Wilder, working at a fast food joint and whose mom is in law enforcement. And there’s a ton of side characters.

I assume this book is contracted as a miniseries. They have a pretty set plot point from A to B with the treasure map, but it will be key to develop the characters into more than just their mission. That will give the book legs beyond finding the treasure.

I’m in on this journey.

So I’m not thrilled that the girls are actually supposed to be in high school. They are either going to be juniors or more likely seniors since they have to take the SATs. (Wow, I’m so glad I don’t have to do anymore standardized testing in my life.)

We meet Dot’s mom Sharon here. Sharon works at the library, which her love of books obviously passed to her daughter. However, Dot is not a fan of her mother. She doesn’t really say why, except her mother is super intense.

Speaking of intense, Wilder notes that her mom, the sheriff, would likely throw her in jail to teach her a lesson. So two intense moms.

I really do want to get to know the other girls more. Some of them, I don’t know their names, and I feel like Piper, the dog who’s name has come up, has more characterization than them so far. Especially in that she saves the map and gets out of every situation with them. Piper also wins at poker.

I did appreciate the book acknowledging the Tillamook and Salish peoples. Historically, Native Americans were pulled in for code work in WWII. And if we’re dealing with a pirate from a few generations back, local Native American languages would be a great coded language for the map.

The chase scene felt a bit Scooby-Doo. I also wonder about the rules of the supernatural in this universe. So far, we haven’t seen anything paranormal or supernatural. Except the dog being a card shark.

I hope the characterization steps up.

This book remains fun, but it’s not really pushing boundaries. Yes, as a modern day Goonies, it enhances the cast and adds different, much-needed perspectives. However, depsite these flaws, it remains generally enjoyable.

Ed and Dylan are adorable, even though I doubt we’ll get a real reconciliation. I do love Dylan as Tillamook representation. Especially love her being a writer, and how she’s all bitter about them interrupting her work, but then like every writer, is going to take an excuse to interrupt her work. This is too true.

Though Dylan continues to make me confused at just how old the girls are supposed to be. It’s clear they are on the cusp of perhaps going off to college? Maybe seniors in high school, during their last summer, as Wilder’s mom gives her a hard time about the number of schools she’s interested in applying to. You’d have to apply for college well before senior year came to an end, if going right away. I suppose Dylan could be a year or two older.

Love Ed talking about the treasure and then everyone else commenting about all the other things in the world that matter more to them than money. This as a nice shortcut on characterization and priorities.

Sheriff Hadlock is definitely onto them. She knows they were at the construction site. But she also wants to give her daughter and her friends the benefit of the doubt. I thought it was a nice balance for a small town sheriff.