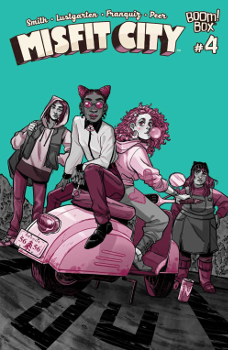 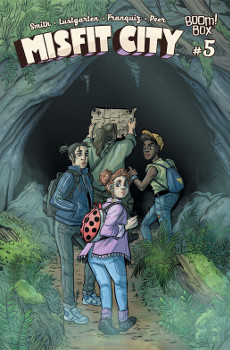 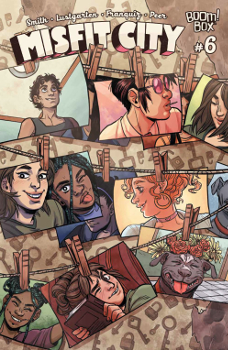 Dot seems much better than someone who just had a spiritual possession should be. Of course, Pip provided a smelling salt that would wake anyone.

Wilder has a moment where her friends decide that Shuck Fair is a more important place for them to be than on their ghost treasure hunt. It was a nice realistic moment that they needed some normalcy. They needed to regroup. And they needed to focus on the other important things in their lives.

Though Wilder and Pip did look rather sad. Brittany Peer’s coloring choices helped a lot with this tone through her monochromatic choices. Then the pop of color when they make it to the Shuck Fair.

I kind of adore that Shell or High Water is actually a crappy band, but that Mace and her brother have no idea. It’s adorable to see them high fiving each other after the song backstage.

Of course, we have our villains on the chase, and we have Wilder, who cannot put down her mystery, getting stories from Denby’s old partner, who also wants the treasure.

It was both surprising and unsurprising to find Captain Denby alive.

We’re finally getting back to the mission. Or to how clever these young women are. I kind of adorable that Captain Denby has been living for so long in these caves, exploring them, and totally missed the major vault.

The parrot was certainly put to good use. Plus, you can’t have a tale about pirates without a parrot. It was ultimately Pippin going nuts over the bird that made the discovery fully happen. Dogs are the best, and also the worst.

I do want to know who those fake relatives are. How did they find out? How they did pretend to be related with actual validity? How will they not get caught by the booby traps?

The logic that the girls use to uncover and open the vault was great. It did remind me of Lumberjanes, at least taking its cues from that book.

Though again, I found myself wishing that I knew the girls each individually a little better.

What is going on in this book? Seriously, it is everything and the entire kitchen sink. There is too much going on, and in part, I believe it’s the way this book tries to be everything to every character. I appreciate the diversity in who these young women are; but it is also trying too hard to make sure everyone gets a equitable storyline.

For example, Ed and Dylan are adorable together, and I’m always a champion of more queer romance representation. However, it is too much. There is too much time dedicated to a ‘will they or won’t they’ get back together story.

Likewise, I’m not sure we need a Wilder and Todd romance. Too much, too many characters. Especially when I was still like “who’s Karma? Oh, yeah.”

It felt odd pacing wise to throw them out the cave. Yes, they needed to go home to regroup, to charge their phones, and maybe come back to the cave a little better prepared. But it seems like they would’ve made a more impulsive choice to go immediately back to the cave.

Mace pushing to tell Wilder’s mom what’s going on is interesting. I don’t understand why they don’t think she’d believe them about Denby still being alive. Or at least take them seriously, even if they have “gotten into trouble” a lot recently.

Though certainly not telling the adults is part of this trope that Smith and Lustgarten play with. This tale is about these young women on an adventure without adult help.