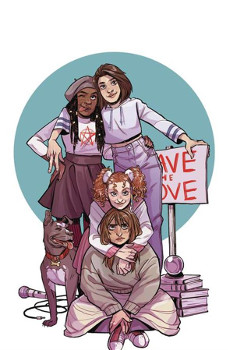 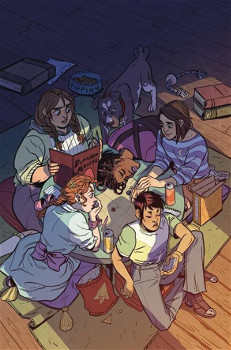 Halloween is the time when you can be what you aren’t. Here, all of them except Karma, are dressed as monsters. Or as creatures who are likely more powerful than young women.

I do enjoy how incompetent they are. They try to break in the giant house, but don’t count on noisy windows. Though you’d think they could find a window to a room where the baddies don’t also happen to be. That was the most awkward trick or treat in the entire universe. Not that I would turn down cash.

The local party was pretty great. Garth and the heir flirting was funny and ridiculous. One was flirting and the other may have been egoing.

At this point, the stakes aren’t here for me. They don’t make sense in moving the characters forward. There is curiosity, and that’s always been a bigger motivator in the texts Misfit City seeks to emulate. Who’s this person in the plague doctor mask?

Black Mary’s spirit is going to wreck some havoc. Maybe this will be what the women actually solve at the end of the book. I’m okay with this element. However, it seems extra late in the story to introduce another mystic element. And the only other element introduced Dot’s very brief possession.

I did love the history turn that Smith and Lustgarten added about Black Mary being part Native American, not just a white savior of the people who she wanted to give this treasure back to. And it was nice to have the resolution that the money did indeed go back to protecting the original peoples, the Tillamooks, and their history.

However, the resolution felt rather neat. I kind of wished that instead of discovering those caves earlier, we just more time with the girls here, using their brains. This whole issue was a speedy read.

We get a hint at who helped the girls on their journey. The teacher. But we still don’t understand more of his role. And we don’t have a postmortem with Wilder and her mother. You think a little resolution might be needed.

Overall, this series had a lot of promise, but floundered as a cohesive storyline with perhaps too many characters.