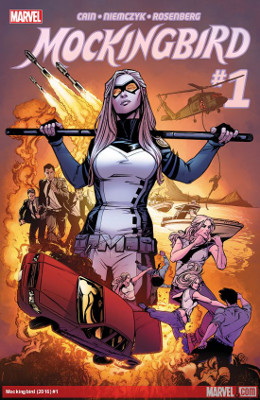 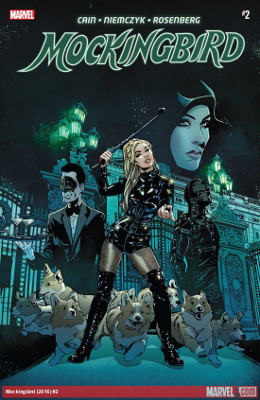 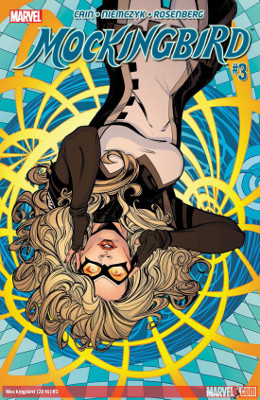 Love this look at the institution of being a superhero. Of course, there were be processes for healing them after their fights and other checkups, like for Bobbi’s injection of the super solider serum. Also the routine and pacing for the issue are brilliant.

Niemczyk adds wonderful details in her art, along with Cain’s commentary in Bobbi’s head, like about Hercules’ costume. Love Bobbie’s knee-high rainbow socks and adore the corgi, whether that’s an illusion or not. I hope for a real dog.

So the white alien creatures…can’t wait to find out if they’re real or not.

In general, the tone’s great, both fun and serious. The art’s fabulous, and I’m looking forward to reading more issues.

This book continues to be super fun. Bobbi definitely tells her stories on her own terms. I like the back-and-forth about if Lance is her boyfriend or not. And how she has many more saves than he does in the tally.

Good to know that the Hellfire Club’s still operational. And black leather is still the attire. If Bobbi’s to be believed.

It does seem that perhaps they should’ve had some more backup. Or maybe a super corgi with stealthy queen finding powers. It was funny though when Lance shocked himself to zap the others. Not to mention all the digs Bobbi made about British smells.

I assume Bobbi being able to block the Black Queen’s psychic powers has something to do with her on-going medical issues.

If Bobbi was right about anything in this issue, it’s that those cops had no idea how to talk to a teenager girl. Much less a teenage girl who was just discovering her superpowers and only somewhat knew how to control them. I really liked the twist that Rachel Oakley wasn’t keeping her friends hostages, but instead, she didn’t know how to let them down safely.

The opening pages of this book were incredibly strong. I loved Cain talking about Bobbi as a girl who always wanted to be a superhero, but realized that all the superheroes were white dudes. Also love the lead-in about how she was obsessed with math and science. Yes! I loved how much this made Bobbi’s story, and her quest to be a hero and use science and math more relatable.

However, the momentum kind of fizzled when actually getting to Rachel’s story and the situation with the cops. This book’s had a strong, off-beat sense of humor. It just didn’t play well with the gravity of the situation here. Especially when Rachel ends up killing the news reporters. Whether that was intentional or not, it got much darker. Even when those news banners tried to point out systemic sexism.

Though “Breaking news: Nation stops being sexists, starts talking about tampons. “It’s about time,” says Mockingbird.” is my favorite news headline ever, even if completely in Bobbi’s imagination. Which makes you wonder if she even succeeded in saving those girls. It’s an interesting narrative choice that we don’t see what happens to Rachel after everyone’s on the ground again.