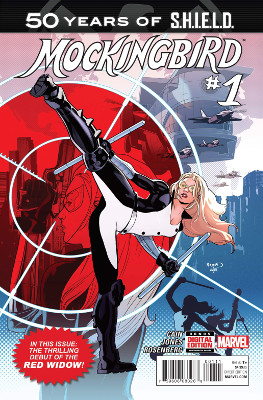 Cain and Jones teaming up for a book about Mockingbird: yes. Yes, so much I approve of this. I only wish this was an ongoing, not a single issue.

Cain has a hard task of taking all the different versions of Bobbi — West Coast Avengers, more recent spy stuff with Hawkeye, and the Agents of S.H.I.E.L.D show — and bringing some coherent narrative to her story. She does do a good job at it and creating a new story to show us the different aspects of Bobbi, not just tell us through meaningless flashbacks.

There’s also a good amount of humor in this book to balance it. Love Lance Hunter’s house and how very British is. Ridiculously so with flags everywhere, including his underoos and the TARDIS cookie jar with his bullets in it. They don’t seem to be in England, which makes it all the better.

The conversation about the super solider serum being the highest prized secret in the MCU was very interesting. It is surprising that no one’s been able to fully replicate it since the 1940s, except Fury has some copies. Always with Fury.

Wilma Calvin’s death hit an interesting note for Bobbi to make the connections of who she’s become. Yes, an academic doing research sounds much more boring than a super spy.

Unfortunately, her son Percy is less of a good guy. I’m surprised Bobbi let him get that much of a drop on her. Especially since the moment he walked in the room, his shoes triggered Bobbi to think he was up to no good.

This was some great cross-marketing for Marvel. Seriously, this is the first time I’ve seen them specifically address that the Mockingbird title was going to be picked up and read by women and that they might also want to read a book about the Widow.

And it helps that Stohl is a pretty sharp writer. Her creation of Ava as the Red Widow was pretty smart. We already know that there are other Widows, but also there haven’t been many books about what happened to them when the USSR fell.

Except for, of course, from Black Widow’s POV.

I like seeing Black Widow fail, but in another manner. In that she doesn’t support her sisters in the way she says she will. What I appreciated about Ava is that she stood up for her friends, so she wasn’t so calloused about being out on her own.