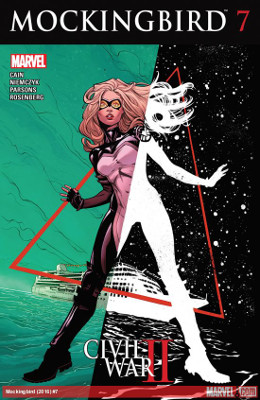 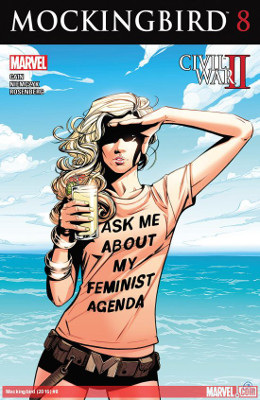 I like Cain trying to clean up Bobbi’s story a bit. From Bobbi’s point-of-view anyway. Slade is that gross boyfriend with a van who reminds you every bad decision and probably some choices you didn’t get to make too. Niemczyk even draws him like a creep.

The cast of suspects was pretty cute. This is probably one of my favorite bringing in the actual creative team from the book. It was cheeky in a way that fit the tone.

The mystery itself doesn’t make any more sense than anything else in Mockingbird. And you wonder how much will actually come out of it. Except some revenge for Bobbi.

I’m crying tears because this book is over. I love it so much. There’s always seems to be a lack of unique takes on characters and knowing how to make them both fun and impactful.

I love the reveal that Clint broke up his marriage with Bobbi over her being a murderer, only for her to believe Clint killed Hulk. No matter how much she wants him not to be guilty. I guess they are now even.

I want to visit the Kingdom of the Lost Mercorgis. They are the most adorable, and the best last moment of surreal wacky for Bobbi.

The assemblage of nerds who thought they could do more as Bobbi empowered then was pretty great. I bet the Doubleclicks are super happy. Love that Banshee dropped the Phantom Rider. And the progressive feminist pirate skeletons and their “way to engage in stereotypes.”

Of course, Bobbi ends up in the Swiss Alps with the best Ka-Zar and Clint and Hunter arguing who is Tyler Durden. Beautiful.

Buy copies of this trade for your friends. Then tweet at Tom Brevoort to tell him you did!