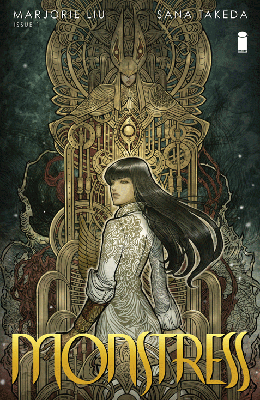 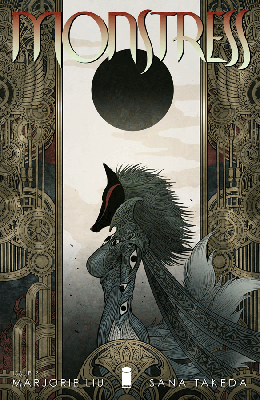 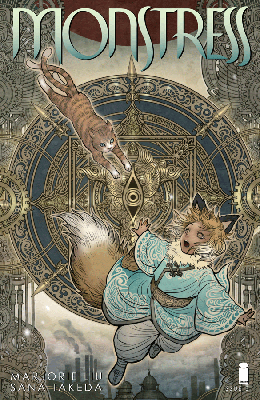 This has my vote for the best first issue of 2015 by far. The story was immediately gripping, the world building spot-on, and the art beyond gorgeous. It was an extra long issue, and I wanted more of it, stat. (Good thing I also have issue two as I’m behind on reading.)

Also, I didn’t expect so many people to have died by the end of the first issue. Like Sophia Fekete, who I assumed would be more of a antagonist throughout the book to Maika Halfwolf. Or at least she seemed to be set up as so given how the plot started and those red fire eyes. (Maybe she will have survived the burning. Especially since we know there’s another type of powers in this world that hasn’t been fully seen in awhile and Atena warns her against metamorphosis.)

The premise of a war and a separation of races that are rather new to this society is interesting. When Liu first introduces Cumaea (witches), Humans, and Arcanics (monsters?), we see the Arcanics being sold as slaves / pets / toys / items of curiosity to the Humans. And then we see Cumaea as the scientist witches with some kind of power status among Humans, but a separate force and with a mind to experiment / eat / torture the Arcanics. And at least I made some assumptions that there might’ve been a recent war — Maika says it’s been over for five years — but that this society was divided long ago. However, the reveal that Maika’s mom and Sophia’s mom worked together when they were young girls shows this is not true. Totally going to be interesting to see where Liu takes this and how she relates it back to our current world.

As mentioned, the art here is gorgeous. Takeda’s style leans toward manga/anime (which she is a Japanese artist), but doesn’t take all the trappings of it. For instance, Little Fox is probably the most manga-style character, not only being a fox, but with big round eyes and a slightly oversized head, which actually would make sense for a fox. However, not every character does, nor does every animal. The cat may have two tails, but its other proportions are that of a cat, same with the unicorn. (Also putting a unicorn in a background like a horse is kind of brilliant.) Takeda’s details really take this book up a level. One of my favorites was how Yvette’s mouth went from normal to big bad wolf with pointed teeth.

Can’t wait for more of this world.

Still so freaking good. I utterly love how determined Maika is to find out more about both her past and her newfound powers. I’m not a huge fan of the women who forget their memories, but have powers, and then discover themselves trope, however, using it as an all-consuming passion seems about right.

Not surprised that Yvette was brought back to life and that both Sophia and Atena survive. I am interested to know exactly what they mean by Ancients. I’m assuming Arcanics are actually in part Human, especially since at one point they traded and co-mingled together. Emilia also confirms the nearness in only a generation or two.

Kippa continues to be a bright spot to also help show the darkness of this world. I love how Liu uses Kippa for this and to also show that the mask part affects Arcanics. Of course, I most adore the cat as a keeper of knowledge, especially that which the other peoples have forgotten.

I hope Tuya is doing something extra amazing when we finally do run into her. Probably whatever she was trying to tell Maika that night.

This book continues to be excellent. It’s beautifully written and drawn. Takeda’s art is on point and enhances the story so much. This is definitely some of the most gorgeous art I’ve seen in a book in a while.

I’ve mentioned before that women/girls who are too powerful and women/girls who are missing parts of their own history (memories, understanding of origins, etc.) aren’t my favorite plots. However, what I’m really enjoying Liu doing here is that giving the reader more information than Maika has. As readers, we get to know things about the mask and about the connections of Maika’s mother which she has no idea about. We also learn things about Arcanics and how apparently they can be created, not just born. Not to mention the history lesson of how the war started. All this makes the book richer and the plot threads come together better.

I’m definitely interested to see Maika start taking more control of her powers. It seems like things are getting less involuntary and more controllable. Especially even that Maika remembers what happened, instead of it essentially being a possession or possession-like.

Yvette definitely has nine lives. Or at least people around her with the powers to bring her back from the dead, even if a little damaged. Definitely interested to know more about Destria (Mother Superior) and how she was changed by their adventures.

Poor Kippa. Though I’m glad to see that Kippa, Emilia, and Master Ren all survived the soldiers and inquisitrixes, who do seem to be over their heads in Arcanic territory.