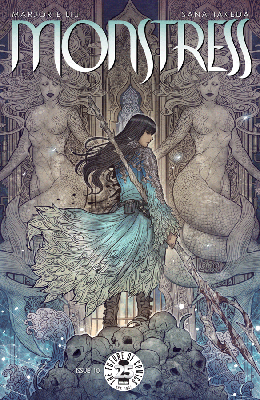 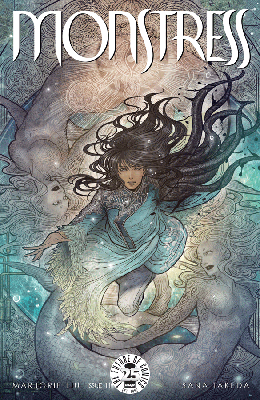 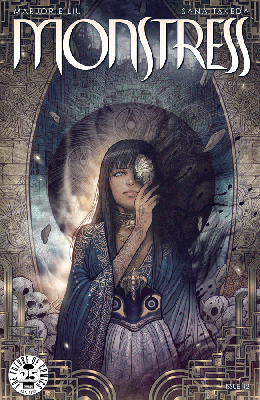 Monstress continues to be one of those books I cannot put down. It is a must-read. It is the book I think I would keep on my list until I could no longer afford to have any fun in my life and then some.

This issue on the Isle of Bones, not only does it introduce a ton of fog and ghosts, it also introduces completely new creatures we’ve never encountered before. In fact, Ferryman is completely made of bones. There are creatures in the trees who appear like fungus, plants, and more. Takeda again blows my mind with her art and imagination brought to life. The details on Ferryman were incredible, and she drew him over and over again in this issue. And apparently, they need him in order to leave the island, which means more Ferryman in Takeda’s future.

I’m interested to see how Kippa reacts to the Ancient Fox.

I love the question of who can kill a god? It sounds like the god who was killed was the same type of creature Monstrum is. Maybe? Maybe not? Again, Monstress builds more questions.

I want to see what Ren does with the cat bones in the bag.

Maika did try to warn those mermaids. You can see echoes of the myth of her mother in how she acts and reacts. While they are all scared, here Maika seems the least daunted because she knows that Moriko lived through this experience.

I do love how Ren continues to be an underestimated character. Of course, his knowledge came in handy when identifying the Blood Fox. He’s very right that Maika is impulsive. She also seems to make some bad bargains. Though Zinn, the Mostrum we finally have a name for, seems to have the same impulsive problems. Chicken or egg.

If we believe the Blood Fox, Morkio’s ultimate plan was to control Zinn, and thus a lot of power, by controlling Maika. I know one of the major plot points is Morkio being dead, but I can’t help but think that she may pop back up one of these days. She plotted too long to be killed almost so easily. Unless, her death was actually at Zinn’s hands and something Maika doesn’t recall.

If Morkio was trying to consolidate power into Maika, Maika’s father also probably a distant cousin.

I know Ancients aren’t easy to kill, but you think they would’ve done a better job at killing the Blood Fox.

Those ghost monsters who tried to eat Ren and Kippa were super creepy. I like how Ren just sees these things as par for the course.

Maika may be free, but she’s trapped with Zinn. Who also desires to be free above all else. Even if in the flashbacks, we saw Zinn power hungry.

And now Maika must pay for murder or the disappearance of Areka, the fish boy from the old photos. She might’ve gotten out of being punished for his death (since she was a child), but not with Zinn eating an entire crew. Not with more deaths on her hands.

Morika got her knowledge and power. But she also learned how wrong she was about that knowledge. While I’d never call her a good mother, she seems almost decent in the mask flashback. Or at least we see her as a fuller character.

Zinn is right to fear that people will find out what the Blood Fox did to the bones of the monstrum. Seems like many will do much for some power. Many will do much to avoid the realities of the world they live in.

Just like Maika has tried to run away from it all herself, but she cannot because that’s where the knowledge about herself rests.