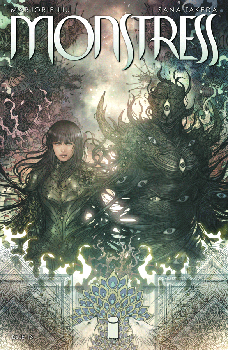 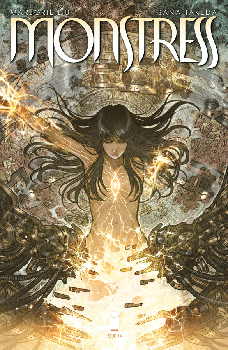 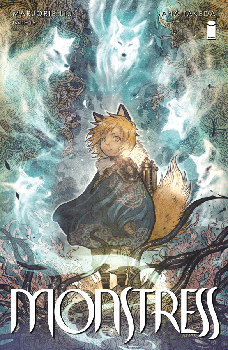 This book remains lush and beautiful and just a world that I want to stay in forever. Or maybe I want to stay in that cat cafe forever. Seriously, some of the cutest and best art in this book so far. I also may have visually translated some of those panels of Kippa eating desserts and other sweets into primary colors and saw a new causal cat-themed game.

Though I do have to say my favorite look goes to Ren when he’s eating his rats on a stick and has a disgusted at the world look on his face.

The knowledge that Maika and Tuya were more than just besties adds an interesting twist. (It’s also nice to see Liu put queer characters in her stories. I’ve read lots of her paranormal romance novels, and my one and kind of only complaint about them is that they are too straight. (Which sidebar: I don’t fault straight romance authors for writing straight romances.)) Though part of me also wonders if Tuya didn’t seduce Maika as a play for the power of “controlling” her since she is the Baroness of the Last Dusk.

Tuya talking to the Queen of the Wolves and just being irreverent was great. It does make me think that even if her friendship and seduction of Maika was for political reasons that perhaps she does regret it now.

I’m rather sad to see the mermaid queen’s death. Again, this is another part of the world that I would’ve loved to see explored more.

So Old Tooth called up another monstrum. Or what appears to be one living in the sea and protecting them through Old Tooth’s connection to the Ancients. Seems like maybe a few folx know more about monstrum than they are saying.

Corvin is another with other loyalties, it seems. I adore Takeda’s designs for Vihn Nem. Her deer attributes are perfect and how the slight hatching on her face signals fur, not human skin, just enough.

Pontus is another stop in this world that I long for more of. However, Maika is right that she doesn’t want to be a prisoner anywhere. In many ways, she’s always a prisoner with Zinn, or a prisoner to Zinn’s appetites. And being locked on a colony doesn’t signal well for the other beings on that colony.

I assume that suit of amour is going to suck the magic — or whatever the Cumaran witches were eating from the Archanics — out of Maika. Or could be literal blood. Maika once again showed how impulsive she is. She should know better, even with threats on her doorstep.

We still don’t know what her mother found. And there is the suggestion that perhaps her mother is still alive.

Vihn seemed to have her own agenda here. Or perhaps she just desired to see the full potential of the shield and her curiosity as a engineer got the better of her. It would be kind of nice to have a character who’s motivation is just her passion for her job.

Will Kippa reunite with her family? Or will we see just more horrors of how refugees are forced to live because they flee to live?

Zinn definitely knew more about the shield technology than he let on.

I’m surprised about the turn to have the Cumaran witches also have Monstrum inside them, and seemingly greatly controlled or completely controlled by them. It helps they have a masks as fashion. But did the masks only become fashion after the Monstrum took over?

Oh, Maika, she has such complex feelings about Tuya. And what terrible memories to bear after being in that situation. It does show that Tuya knew there was Zinn below the surface beforehand. Her little fangs add questions about Tuya’s origin and history.

Seems like the Arcanics are being foiled by their own in-fighting. Of course, we are still figuring out the motives of the Dawn and the Dusk courts.

Kippa’s definitely being put in some danger. I’m not sure how I feel about Ren’s secret mission in part being about Kippa and perhaps being about some debts he owes. Also, I feel that giving Kippa some kind of special powers isn’t exactly needed.

I do feel like this book is going to lead us to some massive bloodshed of innocents. The fox people seemed prime as refugees to Pontus. But we do have the general citizenry, not to mention the incoming war.

My favorite parts of Takeda’s art was the tree in the refugee camp with the photos of the missing family members and the Doctor (if that’s the scary cat’s name). The shadow across its face was pretty powerful with that third eye scar.

Of course Zinn would be lurking right under the surface. And that the lab would draw him out and he’d be the key.

The cats know all the history and all the secrets of the Old Gods. I do wonder how they are working to stop the Old Gods from rising. The Old Gods that aren’t all powerful, if they came later and they have been beaten back before. Even if people like to forget about history.